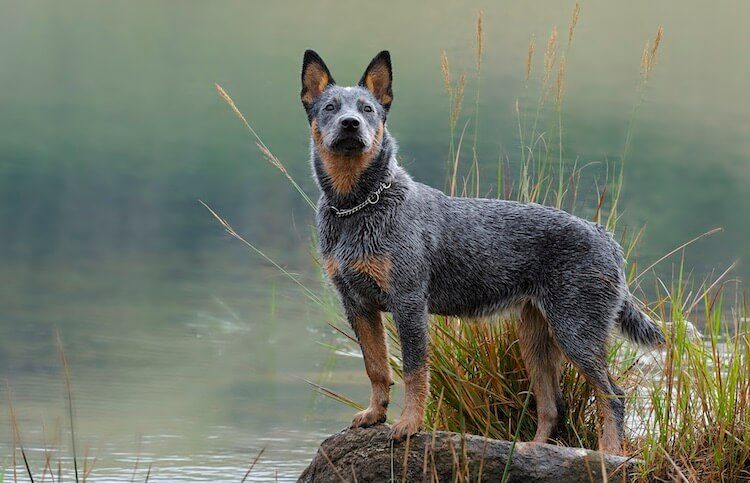 The Blue Heeler, otherwise known as the Australian Cattle Dog, is a medium sized breed who was originally bred as a herding dog.

They were trained to nip at the heels of the livestock; hence their name, Heeler.

The Australian Cattle dog can be red or blue, though this article will be focusing on the Blue Heeler.

Read on to find out if this herding companion could be your new pet.

The Blue Heeler was originally bred as a working dog to herd cattle over long distances.

Selectively bred for their high energy levels and stamina, in order to cope with the rough terrain and high temperatures of the Australian outback.

As a result of their history, this pooch is incredibly intelligent and focused and requires a large amount of exercise each day.

Human companions will need to be active and have plenty of time dedicated to exploring the outdoors with their Blue Heeler friend.

They can however adapt well to the lifestyle of a pet dog, though this is only possible if they are appropriately exercised to prevent boredom and frustration.

The Blue Heeler was originally bred to herd livestock in Australia following the first human settlement there in the 19th Century.

Settlers required a dog who could guard and herd livestock in blistering heat; withstand the tough terrain of semi-wild ranches and have the stamina to run for long distances.

As such, one rancher named Thomas Hall crossed the Collie with the Australian Dingo, creating the Halls Heeler.

The Dingo ancestry is thought to be a factor involved in their distinct appearance.

Hall’s initial dog was then crossed with Dalmatians, Bull Terriers and Kelpies to create the Heeler, which by the late 19th Century (1890s) was well established.

The Australian Cattle Dog Club of America is the official breed club in the US.

First introduced to America in the 1940s this breed was recognized by the American Kennel Club in 1980.

The Blue Heeler is also recognized by the:

If you are looking to adopt a Blue Heeler rescue, the Cattle Dog Rescue Association, based in New York, have been working to re-home these dogs from shelters all over the US. 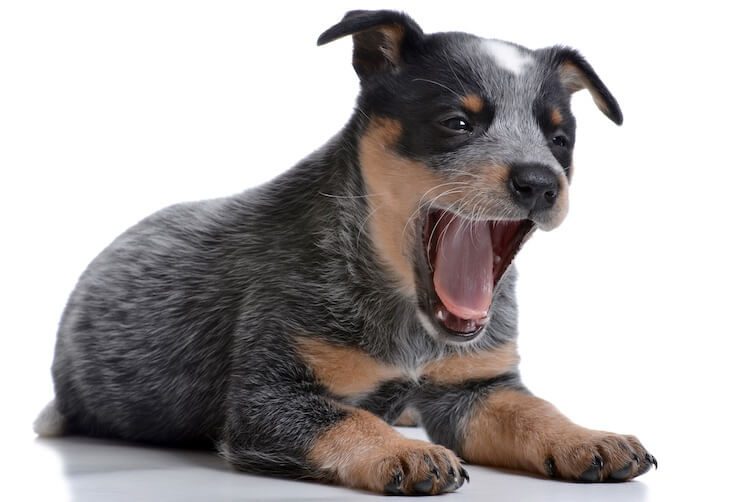 The cost of a Blue Heeler puppy will be between $600 to $1,000 USD for a pup registered with a Kennel Club.

On average there are between 1-7 furry friends in each litter who will be ready to go to their forever homes at around 8 weeks of age.

Both Red and Blue Heeler puppies are born white, but their adult coat color will grow through as they develop and mature.

They will reach maturity at around 18 moths of age where they will be fully grown:

Blue Heeler dogs are not known for being particularly vocal, other than when they deem it necessary, for example when they are over excited or wary of a stranger.

They are known to be quite protective of their family, and are usually on high alert, watching out for anything out of the ordinary.

Unlikely to show aggression as such, they are more likely to raise the alarm.

Aggressive behavior towards humans in Blue Heelers is very uncommon unless they feel threatened.

As this breed is territorial too, they can sometimes be a bit wary of new dogs. They may exhibit this through aggressive behavior such as growling and raised hackles.

Slow introductions and socialization to a range of dogs at a young age will help to combat this and plenty of Heelers are known to be very friendly and playful pups with other canines.

Very energetic, these active dogs are very intelligent and focused.

Known for being loyal, and sweet-natured when it comes to bonding with their human companion, they have a love of human interaction and play time.

As they were originally bred to herd, they have quite a strong prey drive with the instinct to chase anything which runs from them.

Care should be taken with the Blue Heeler when in large open spaces, however their intelligence means they are highly trainable and so can be taught to “leave”.

The Blue Heeler can be very protective of their family and is quite wary of strangers.

If they are introduced slowly, and given plenty of reassurance, they should soon warm to the new person, but the first interaction should be supervised by the owner.

The natural behavior of nipping at the heels of livestock has led to this dog sometimes demonstrating such behaviors in a family setting.

This should be something potential owners should bear in mind.

They are sometimes known to:

These behaviors are of course are all manageable with appropriate training but may be something to consider if you are thinking of adopting a dog into your family.

Generally, the Blue Heeler dog is great around children, but supervision is advised to allow intervention if play gets a bit too rough.

Known for being a good dog around livestock, in the sense that they are unlikely to harm or injure them, but they have strong herding instincts.

Because of this they are likely to try to chase and herd animals they come into contact with. This can also include cats in the neighborhood if they haven’t been trained to “leave”.

Blue Heelers are friendly and sociable dogs if they have been adequately trained and socialized from a young age.

The Blue Heeler is a medium sized dog, ranging from between 35 to 50lb for both males and females.

Generally, females are slightly smaller, measuring between 17-19 inches to the withers, in comparison to males who are between 18-20 inches.

The Blue Heeler is an athletic and muscular dog.

Strong and compact, they have a broad head with a powerful jaw and a black nose.

Their ears are set wide apart on top of their slightly curved head and always held ‘pricked up’ (like a German Shepherd).

They have sloping shoulders but a level back on top of strong forelegs and muscular hind legs.

In America, it is quite common for the tail to be docked on working dogs, however in Australia, Canada and the UK, it is usually kept at full length to aid their maneuverability in turning quickly.

The Blue Heeler can be blue, blue mottled or blue speckled with or without markings.

Their forelegs usually have some tan color at around mid-way which can extend to the chest and neck.

This furry friend has a short double coat, which blows out once or twice a year, as opposed to moderately shedding all year round.

Frequent brushing and a warm bath in shedding season should help to contain the shedding.

Weekly brushing with a slicker brush is adequate for a short double coat to remove any lose undercoat.

Bathing is only necessary as and when it is required as Blue Heelers aren’t particularly known for a smelly coat unless they roll in something they shouldn’t.

Teeth brushing is a recommended daily procedure to minimize tartar build up and reduce the risk of gum disease.

However, unless introduced at a young age, it may be difficult to implement later on. Dental chews and abrasive chews, in conjunction with a dry kibble diet, are a good substitute to teeth brushing.

Owners should also monitor nail length as nails which become overgrown can be painful and will therefore require trimming.

However, in very active dogs, this is unlikely to be often as they spend a lot of time outdoors running around and so their nails are usually kept short.

Best suited to more experienced dog handlers, who are familiar with correct training methods, and have plenty of time for their demanding exercise requirements, this furry friend might not be the best first pet.

The Blue Heeler is known for being able to live off a very limited diet.

It is very important for owners to keep an eye on their dog’s weight to ensure they are a healthy size.

Good quality kibble, fed twice a day (once they have reached adulthood), once in the morning and once in the evening is perfectly adequate for this breed.

This pooch will typically eat around three cups of kibble each day.

Working Heelers may require a diet which is richer in protein, in order to fuel their energy levels.

The Blue Heeler has a remarkable amount of energy, and so requires exercise for at least two hours each day; this requires a dedicated human companion with designated time set aside for exercising their four-legged friend.

They are also very playful canines too, so adore play time with familiar human and canine pals alike.

High energy, a strong bond with their human, and a focused mind makes the Blue Heeler an ideal candidate for obedience, agility and other canine sporting activities.

They also adore the water and love swimming.

Anywhere where they have plenty of space to run around and burn off all that energy is ideal, providing they have been trained to control their herding instinct and refrain from following their nose and running off after unsuspecting animals. 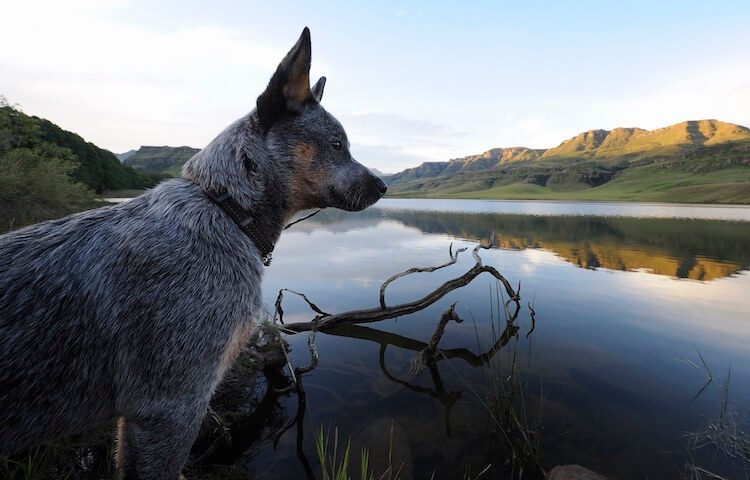 These dogs are very clever and easy to please, making them quick learners and well-suited to the working lifestyle.

With a strong prey drive, and a one-track mind, it is important for training to begin early.

They are very intelligent, which aids the training process, as they are fast learners and willing to please, though this does mean they require plenty of mental stimulation and activity to be a healthy and happy dog.

Lots of training and exercise is required to keep the Australian Blue Heeler mentally stimulated, this will help to prevent undesirable behaviors (e.g. destruction and chewing).

This breed holds the Guinness World Record for the oldest dog ever.

At 29 years and 5 months, Bluey an Australian Heeler, worked for over 20 years and is a credit to the breed for his robust health and his loyal personality.

The Blue Heeler dog has a good reputation for longevity and the typical breed lifespan is between 12-15 years.

As with a lot of purebreds, there are unfortunately some common health problems among the breed which may affect welfare and longevity.

Hip Dysplasia is a malformation in the development of the hip joint. This can result in arthritis and lameness.

Congenital Deafness is often linked with coat color, congenital deafness is common among many breeds and unfortunately this breed is no exception.

Unfortunately, it can’t be prevented or treated but these canines are very intelligent and should still be able to train from hand signals.

They are eager to please and very intelligent. As a result, they require a more experienced handler who can implement a training plan which will combat caution of strangers and a strong instinctive prey drive which is common among this breed.

Their human companions should also be prepared for their high energy levels and should therefore have access to plenty of outdoor space and have lots of time designated to training and exercise.

This medium size dog requires lots of mental and physical stimulation to keep them happy and healthy but are a very loving and joyful companion in return.

Have you had any experience with a Blue Heeler?! Let us know below.

The Red Heeler, perhaps better known as the Australian Cattle Dog, is a herding dog from New South Wales, Australia. Their nickname of “Heeler” comes from their peculiar method of herding cattle by nipping at their heels. A superb herding dog, these agile puppies are [Read more…]