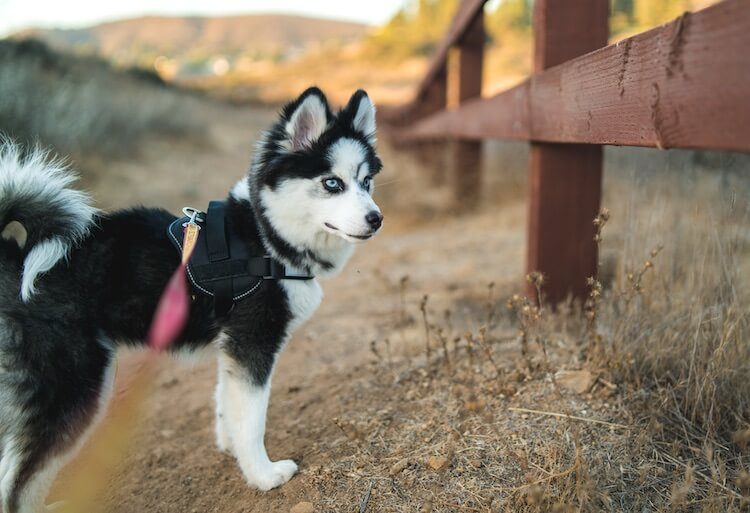 The Pomeranian Husky, also known as a Pomsky, is a designer dog breed.

A cross between a Pomeranian and a Siberian Husky, they are fairly new breed, but are already becoming very popular due to their cute appearance.

Both parents have similar personalities, which the Husky Pomeranian Mix will inherit: energy, intelligence and playfulness.

One of the beauties of the Pomeranian x Husky is the amount of colors and patterns they can come in.

They are great with children, pets and other animals so will happily slip into family life. Their smaller size also makes them ideal for apartment living.

Keep reading to find out what makes this mix such a great companion!

What Is A Pomeranian Husky?

The Husky Pomeranian has inherited its energetic personality from its historically working parent, the Husky, and its desire for love and attention from the Pomeranian.

This has resulted in an energetic, playful and intelligent but also loving companion dog.

They have quickly gained popularity amongst first time dog owners because of their small manageable size and adorable Husky appearance, with striking blue eyes.

Their active and playful personality has made them excellent companion pets for families and seniors in apartments or houses.

This pooch is a very recent designer dog breed and is most commonly found across Europe and America.

Their parents are very well known canines who have a long history between them.

Huskies are historically known to be working dogs for the Chukchi people who were hunters and gathers that lived in the extreme cold environment of Siberia.

Very early on they were used to pull sleds over long distances. They’re very intelligent, resilient and have lots of stamina.

They are descendants from the large working Spitz breeds that eventually made their way to Europe. However, the smaller breed has primarily been bred to be a companion and lap dog.

Because this is a very recent pooch and is a mix of two purebred canines, the American Kennel Club doesn’t recognize them as a purebred.

It is unlikely a Kennel Club ever will recognize this breed in its current form, as there is no consistency with regards to temperament and appearance to set a breed standard.

There are however a few clubs who offer information about the breed:

Because of a lack of approved breeder standards, which are typically set by Kennel Clubs, if you already have your eyes set on this beautiful furry friend you will have to do your research to find a good breeder.

Their expensive price tag (sometimes exceeding $3,000 USD per puppy) comes from the need to artificially inseminate the Pomeranian to create this mix.

The Pomeranian Husky puppy is one of the most expensive pooches in the world, with prices ranging from $1,000 to $3,000 USD.

This is because of how difficult it is to breed them which in-turn makes this dog incredibly rare.

Teacup dogs are cheaper to purchase, but it is strongly advised not to purchase them as they often come from puppy mills and can inherit serious medical issues due to poor breeding.

It is more common to find the Husky as the dam (i.e. mother) because it is easier for the larger breed to carry a litter. Litter sizes are generally between 5 to 7 puppies.

The weight and size of a Husky Pomeranian Mix can also vary depending on which parent they take after. However they usually reach maturity by one year, so you can expect them to be full-grown by their first birthday. 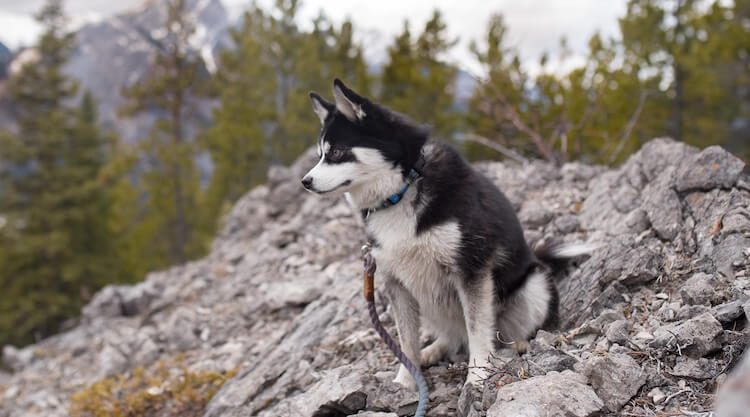 This pooch has inherited the strong loyalty gene from their Pomeranian parent. They love attention and are likely to get it once they start barking.

Mixed with the Husky, their bark is not only loud but also very high-pitched. If you live in the city where excessive barking can be considered a nuisance this breed might not be for you.

A well-socialized and trained Pomeranian Husky should not show any signs of aggression. But, being very loyal they are not afraid to defend their territory and family with all their might.

As a small breed they are more likely to feel threatened in certain situations than bigger breeds.

First and foremost, these pets are companion animals. They are very friendly and love the company of their owners, happy to follow you around wherever you go.

They have a fun-loving personality and are also up for a game in the back garden.

But don’t be fooled by their sweet and innocent look. What small dogs don’t have in size they make up for in character.

Being an independent and confident pet, if you slack off when it comes to training they will take advantage and become stubborn.

This mix makes a great family pet; they love both relaxing and playing with their owners.

If not socialized from a young age this can develop into small dog syndrome, meaning they’ll become over protective and feisty with strangers.

Early socializing is key for this breed getting along with children, dogs and other animals. Especially if they grow up with children or other dogs, it is important they learn how to interact with each other.

A well socialized furry friend will happily play with both children and dogs.

Their size all depends on their parents. If they have more Husky they will be larger and heavier but more Pomeranian will result in a smaller and lighter pooch.

Usually they measure somewhere between 10 and 15 inches and weigh anywhere from 15 to 30 pounds.

There is the exception of the teacup Pomeranian Husky, which is 7 to 10 inches tall and weighs only 5 to 10 pounds.

Looking at the parent breeds will give you the best indication of how big your canine will be.

The main reason this canine is not recognized by any major Kennel Club is because of the range of different appearances they can have; making it difficult to set a breed standard.

No two pooches look alike but they sometimes have similar features.

A commonality is that their facial features are more Husky whereas their stature is more Pomeranian. Essentially they look like extremely cute small fluffy wolves.

This pooch also takes on shared characteristics from both parents, such as their thick double coat and a curved tail. 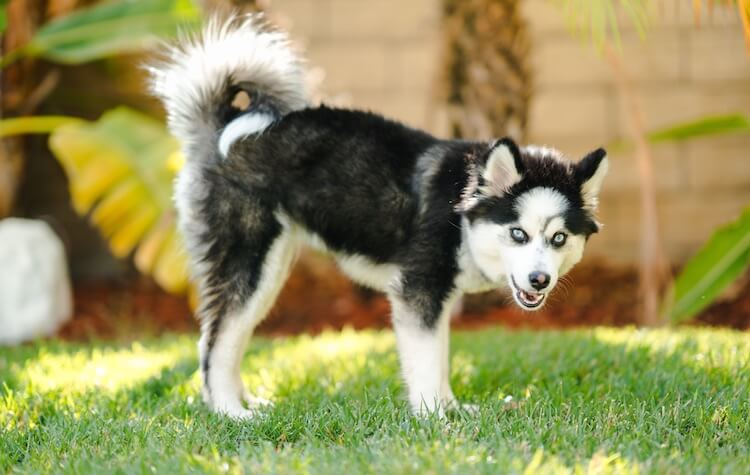 One of the wonderful qualities of the Pomeranian Husky is the wide variety of patterns and colors they can come in:

Both the coat and eye color can vary greatly between puppies.

They can either come in one color or a mix; merle is particularly favored. Their eyes can be blue (like a Husky), or brown (like the Pomeranian) or sometimes one of each color.

Just like its parents, you can expect some moderate shedding from their thick and fluffy double-layered coat.

Their coat may look difficult to maintain but daily brushing, to remove tangles, dead hair and dander, will keep it in good condition.

Brushing not only helps avoid matting but it also spreads their natural oils throughout their coat keeping it well moisturized.

Bathing should be done once every few months, or whenever they get very dirty, with an appropriate shampoo. Try not to bathe them too much because it can cause their skin to dry out.

It’s a good idea to invest in a decent pair of nail clippers to trim their nails every now and then too.

However you won’t need to invest in a pair of grooming scissors because you shouldn’t need to trim your dog. Their coat helps them to regulate their body temperature in the cold and heat, so don’t mess with it.

With a happy and playful personality, small size and minimal grooming needs, this mix suitable for families and apartment or house living.

A high quality food, specifically for small breeds, with plenty of animal protein, fat and limited carbohydrates will ensure this active breed gets all the nutrition they need to live a healthy life.

Small dogs should only eat what they need and not in excess, otherwise they can easily become obese.

How much you feed them all depends of how much they weigh, their age and activity level.

Dogs that weigh between 20 to 30 pounds need 30 calories per pound of body weight. Smaller dogs have a faster metabolism so will need more, whilst bigger dogs are the opposite so need less.

Their Husky half was bred to work so even though the Pomeranian x Husky might look small; they still need exercising everyday.

However because of their small size, they don’t need intense exercise like larger dogs. Juts playing with them in the garden can be enough and will help strengthen your bond.

But like all dogs they love to get out and about, discovering new sights and smells.

Try walking your pooch for 30 minutes everyday and if they still seem a little too hyper add some fun play at the end of the day.

With two intelligent parents, and being major show offs, you shouldn’t have any trouble training your pet.

However, they can have a stubborn streak, so this breed requires a strong willed owner who is patient and can teach them how to be a well-balanced dog.

With lots of positive acknowledgment, they will be eager to please and are happy to learn new tricks as long as they get a treat along the way.

Early training and socializing is always the best way to get the most out of your dog, start with basic house rules like no jumping up. 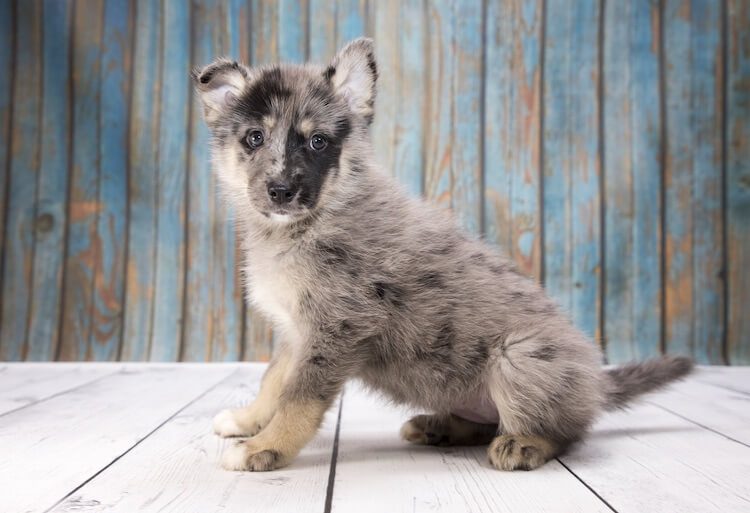 Many people believe that crossbred dogs (i.e. designer dogs) are healthier than purebreds because of the larger gene pool.

However, if both parents are particularly prone to contracting specific health issues their puppies still have a high chance of inheriting them too.

Luckily both the Siberian Husky and the Pomeranian are relatively healthy breeds. However, there are some conditions this pooch can develop:

With the correct care, a healthy diet and consistent exercise, a Pomeranian Husky’s lifespan is between 13 to 15 years old.

The Pomsky is a great first time dog for families or singletons living in houses and apartments.

This small but willful breed does well in any loving and committed home. Their manageable size means they can live in apartments, whilst their playful characters make them suitable for families too.

These cheeky chappies are not to be underestimated; they have a lot of life in them and want to live it to the full.

They are very affectionate and want nothing else than all your love and praise.

Even though they are small they still need a minimum of half an hours exercise a day. They love showing off and can pick up new skills quickly so teaching your dog new tricks will help reinforce your bond.

The Corgi is an adorable and cute dog that is famous for its short legs and stocky body. Anyone who has a Corgi knows they make loyal and wonderful dogs. The Queen of England has owned 28 Corgis and 2 Corgi Mixes. Their kind and Continue Reading →

Beagle Lab Mix: 15 Facts Which We Love About The Brilliant Beagador

You may have heard of the brilliant Beagle, or the lovely Labrador, but what happens if you put them together? Why the Beagle Lab Mix of course. This cute crossbreed first came into the dog world around 30 years ago and has been developing a Continue Reading →

Mop Dog Everything You Need To Know About A Komondor