Clever, loyal and goofy – this is exactly what we get with the Bernedoodle; a Bernese Mountain Dog crossed with a Poodle.

A relatively new hybrid dog, it is thought that the first Doodle appeared around 2003 – 2004 from breeder Sherry Rupke.

Very similar in temperament to many doodles, just a little more mischievous as a puppy. Coming in three sizes: Standard, Tiny (i.e. Toy) and Mini Bernedoodle – we are sure there is one to fit your lifestyle.

With early socialization and positive training, could this hybrid be the most gentle, happy-go-lucky companion for families of all sizes? Read on to learn more about this low shedding, loving companion. 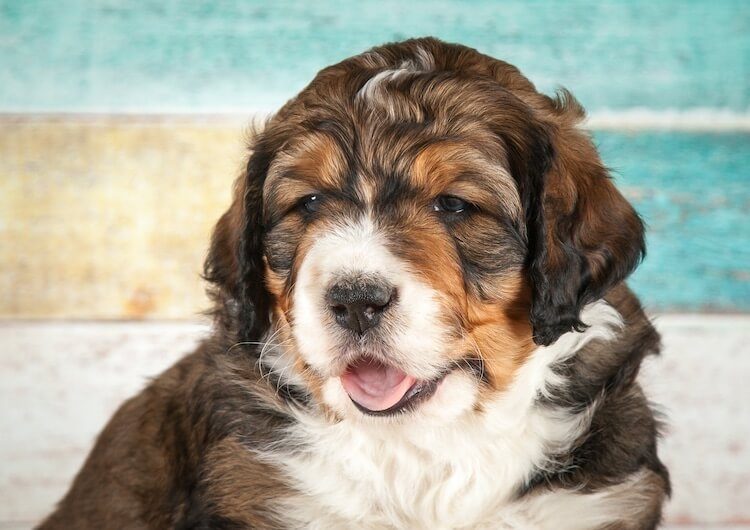 What is a Bernedoodle Dog? Breed Overview

Not as simple as we first thought. The Bernadoodle comes in three sizes:

First generation Standard Bernedoodles are a result of cross breeding a Standard Poodle with a Bernese Mountain Dog.

First generation Mini Bernedoodles are a result of cross-breeding a Standard or Miniature Poodle with a Bernese Mountain Dog.

Tiny Bernedoodles can only ever be second, or subsequent generations, as they are a result of cross breeding a f1 or f1b Mini with a Toy Poodle.

They were originally bred to capture the positive traits of both the Bernese Mountain Dog and the Poodle; primarily:

As it’s a hybrid, this Mountain dog mix isn’t recognized by any Kennel Clubs, but, they have been a registered breed with the International Designer Canine Registry since 2009.

Built for hard work, the Bernese Mountain dog is robust and powerful.

Originating in Switzerland, the Berner’s job was to drive cattle and protect farmyards. They were renowned for their drafting capabilities, being able to pull many times their own body weight.

This history creates an image of a hardy worker, strong and muscular. Whilst the Berner is all those things; owners know them better for their goofy, placid and sweet nature. They really are a gentle giant.

As we’ve mentioned, this dog comes in three sizes and this depends on the size of Poodle that has been cross-bred.

Generally, all poodles have a similar temperament: Intelligent, playful and thrive in busy homes.

Despite its association with France, the poodle originated in Germany. More than 400 years ago, the Poodle was the duck hunter of choice (i.e. a water dog). The Poodle is loved for its intelligence and prancy nature and Toy Poodles are a firm favorite for city dwellers.

You’ve probably all seen a Poodle in their full continental clip. The rounded tufts of fur on their tail and legs are called pompons. Most wrongly mishear as “pompoms!”

When we cross-breed the Bernese Mountain Dog with the Poodle, the result is generally an intelligent, gentle, sociable and enthusiastic companion who is suited for all. 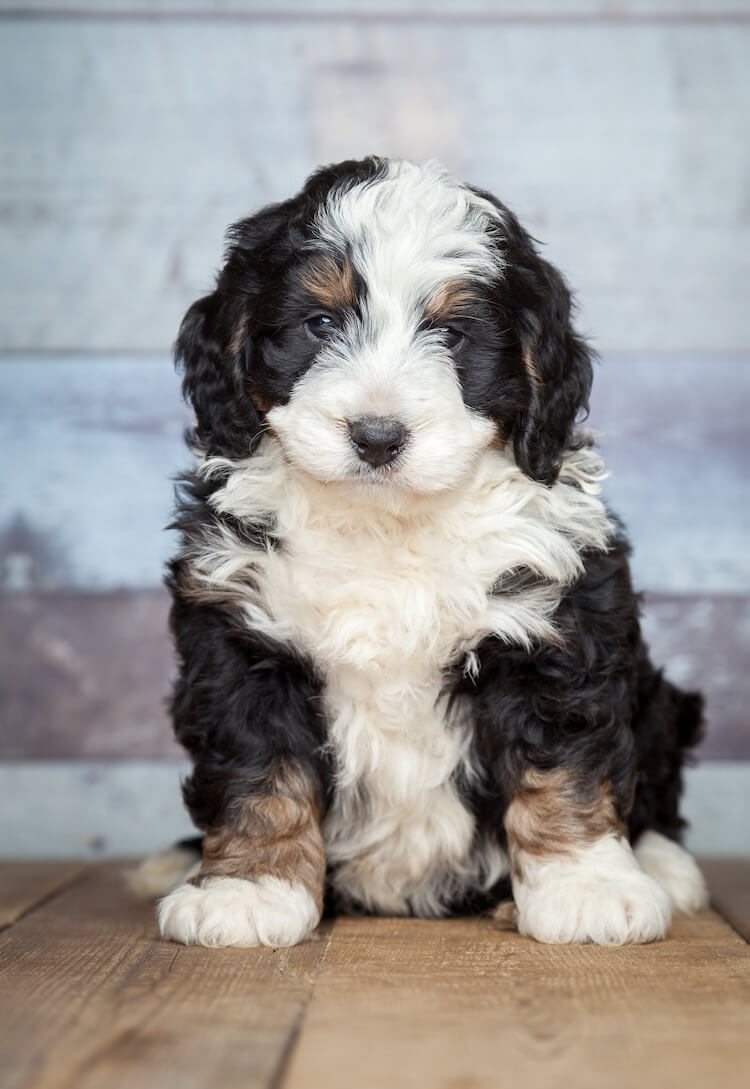 Often described as similar in nature to the Goldendoodle, the one main difference is that some puppies can be particularly headstrong. With gentle positive training most puppies grow out of this, but you need a good handle on training if you’re thinking of taking one of these on.

A Bernedoodle Puppy, from reputable Bernedoodle breeders, will generally cost between $2,500 – $5,000 USD. Prices may vary depending on the color of the puppy, what size or which generation they are and because they are a rare dog breed.

For a Standard, the sire and dam are usually interchangeable due to the similarity in size. For a Mini, the litter should have a Bernese Mountain Dog as the Dam and the Poodle as the Sire.

As the Tiny Bernadoodles are second or subsequent generation, the Dam and Sire and same are again often interchangeable.

Due to the size differences, it is difficult to predict how big your puppy will get, but a reputable breeder will have a good idea based on the parents and previous litters.

Combining the intelligence of the Poodle and with the goofy, placid and sweet nature of the Bernese Mountain Dog, the Bernedoodle, when socialized and trained correctly, is a loving and playful dog.

They are gentle with babies and toddlers, energetic enough to play in the yard with teenagers and sensitive with the elderly – they really are a superb all-rounder.

With both parent breeds being historic workers, they suit active homes where they will have in excess of 60 minutes exercise per day.

The Bernese’s dedication to their owner, combined with the intelligence of the Poodle, means they don’t tolerate being left alone – for that reason they are suited to homes where they will have company for most of the day.

Being a hybrid, as much as we hope for the positive traits, it is possible that your puppy could still inherit the less than desirable traits from either or both parents:

When socialized and trained from an early age, this dog can be the most sociable, gentle and loving comrade; suited to all families.

They are generally tolerant of other pets in the home, even cats if they have grown up with them.

In an active home with a patient and gentle owner, this dog really is a curious and smart addition to any family.

How To Care For a Bernedoodle – An Owner’s Care Guide 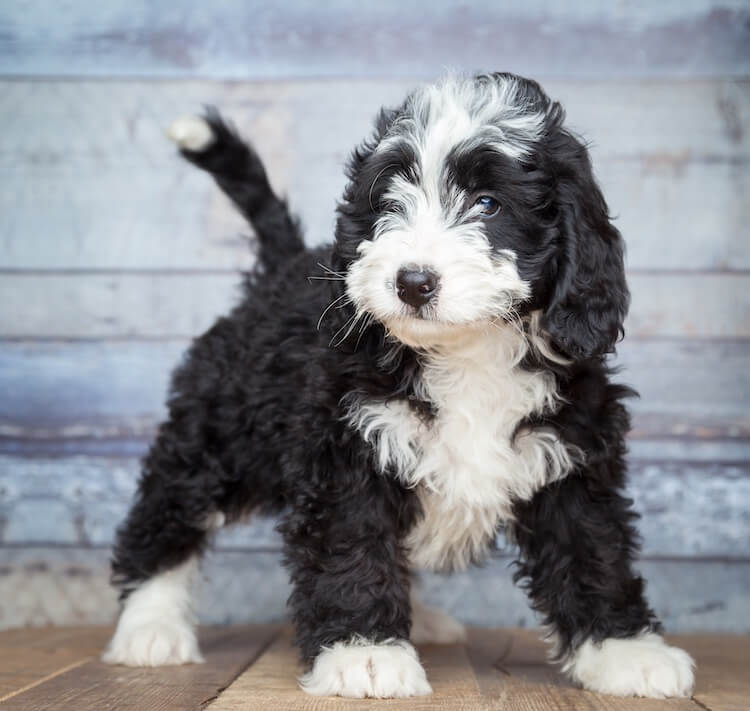 Bernadoodles thrive in family homes where there is plenty going on.

They are happy with all ages; they are super observant and adapt their behavior as needed. We can thank the protective Bernese for that. Being relatively healthy and low shedding, you’ll be giving most of your attention to training and keeping them occupied.

Let’s take a look at what it takes to care for them.

As a puppy you should be feeding your dog a minimum of 4 times per day. This can reduce to 2 meals per day when fully matured.

As a large breed, the Standard Bernedoodle is at risk of bloat; small but frequent meals is thought to reduce the risk of bloat.

For your puppy to grow to his full potential, you should be feeding a high quality kibble specially formulated for larger and active breeds.

This may be dry, canned, dehydrated or raw.

The important thing is to ensure the food meets his daily nutritional requirements; fundamentally his protein and fat quota. Protein is essential for the function, repair and regulation of your dog’s tissues and organs. Fat is vital for energy.

As a puppy, 22% of his diet should consist of protein and 8% fat. This can reduce when fully matured to 18% protein and 5% fat.

Your Bernedoodle’s size will determine his calorie requirements too:

As both parent breeds are historic workers, they are relatively high energy – we think it mostly comes from the Poodle though as the Bernese Mountain Dog is generally a calm, docile and placid dog.

What we do know, is they love being active and for that reason, suit busy households.

They love their exercise and will happily hike for hours. If you’re looking for a walking buddy, they are a perfect choice. A Standard Bernedoodle should be exercised for 60 minutes per day.

This breed, especially the larger Standard variation, is at risk of hip and elbow dysplasia and for that reason it is essential to avoid over-exercising as a puppy.

The 5-minute rule. For every month of age a dog can walk for 5 minutes. So you can happily walk your 4-month-old for 20 minutes per day without causing any growth issues.

Other health issues, such as dislocating kneecaps are congenital, however, it is possible that over-exercising can contribute to its development so in the Mini and Tiny Bernadoodles this should also be a consideration too.

Boasting the intelligence from its Poodle parent, you would think the Bernedoodle would be easy to train. This isn’t always true.

The Bernese Mountain Dog is renowned for sometimes being hard-headed as a puppy. Whilst they often grow out of this, it can somewhat throw a potential owner if you’re not expecting it. Berners are also incredibly sensitive and can get offended easily.

Early and continued socialization will reduce the likelihood that you end up with a wary, cautious and skittish Bernadoodle.

He needs to experience what the world has to offer, in a safe and controlled manner. He also needs to be trained with a gentle hand.

Positive reinforcement and reward-based training gives you the best shot at this. If he is being stubborn as a puppy, stay calm and reduce your expectations. Always set him up to succeed and enable him to carry out the behavior you want to see. Punishment never works.

This dog is generally healthy, however, they do suffer with some of the same health issues their parent breeds do:

Like Boxers, Bernese Mountain Dogs have one of the highest cancer rates compared to other breeds.

Some breeders suggest the following tests should be carried out when breeding:

This Mountain Dog Poodle mix has an average lifespan of between 7 to 18 years. Smaller versions, such as the Mini and Toy will be more towards the 18 years of age whereas the Standard will be closer to 7. 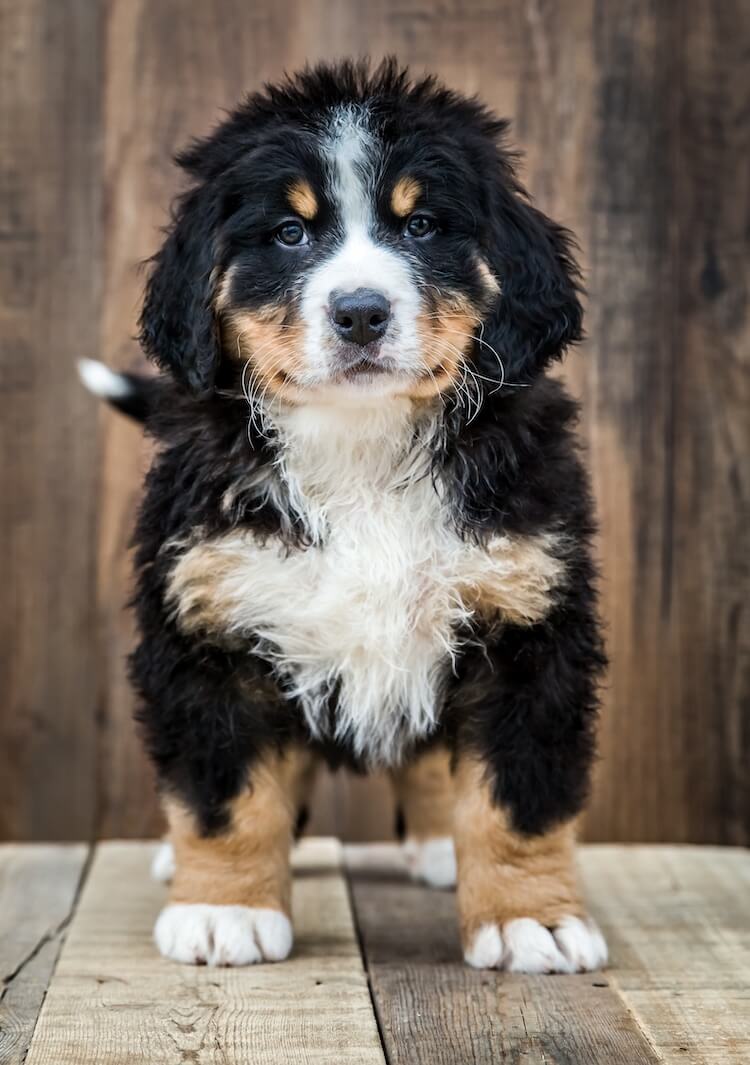 Generally, the Bernedoodle is described as a shaggy teddy. We seem them in three sizes:

As they are a mixed breed, most dogs have a curly or wavy coat, but it is possible that they have a straight coat.

Inheriting the single layer coat from the Poodle, they are generally low shedding.

Whilst most think the Poodle is hypoallergenic, they do still shed dander. With the curly coat, the dander is trapped for longer which is why allergy sufferers don’t tend to have a severe reaction to their coat.

Whilst they don’t shed, they still need regular grooming.

You should aim to brush your dog 2-3 times a week.

Most owners have their Doodle clipped regularly at the groomers. As it’s not a pure-bred, there isn’t a grooming standard, so most have a teddy bear clip.

With these coat types, it’s not generally advised to clip it until at least 7-9 months old; clipping too early can impact growth and cause irreversible damage.

Bernedoodles usually come in black, black and white, black and brown and tri color and can have a range of markings. You will immediately recognize them from their shaggy, almost unkept look.

The Bernedoodle is a perfect addition to any family home; they are adaptable and sensitive, socializing with babies and elderly alike.

Like their cousin, the Miniature Golden Retriever, they thrive in a busy house, with patient and gentle handed owners.

Bernadoodles come in three sizes and this is key in your hunt for a puppy – remember that the tiny must be a second or subsequent generation.

Goofy and clever, early and continued training and socialization is essential.

Be prepared for a stubborn puppy; but once you’re through this challenging stage you will have a loving and playful companion. Any questions about this loveable breed? Leave us a comment below.

Many people have heard of the Labradoodle, some have even heard of the Goldendoodle, and now there is an Aussiedoodle. These intelligent hybrid dogs are a relatively new designer cross, and yet are loved by all who encounter them. The Aussiedoodle is an excellent family Continue Reading →