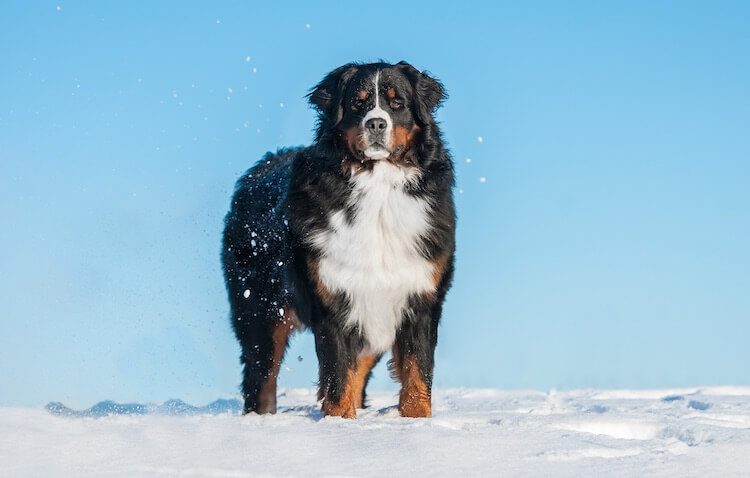 Known for his bulky frame, athletic ability and intelligence, the Bernese Mountain Dog is an incredible pet for any family, and the perfect canine for any job.

They are also infamous for their incredible strength and pulling power.

This, combined with that fierce loyalty, makes them an excellent farm dogs.

The Bernese dog has a long silky double coat and thrives in cold climates due to their origins in Switzerland.

Before choosing this breed as your family’s companion, let’s talk about everything you should know about them; their origin, how to keep them healthy, and everything else in between.

What Is A Bernese Mountain Dog? 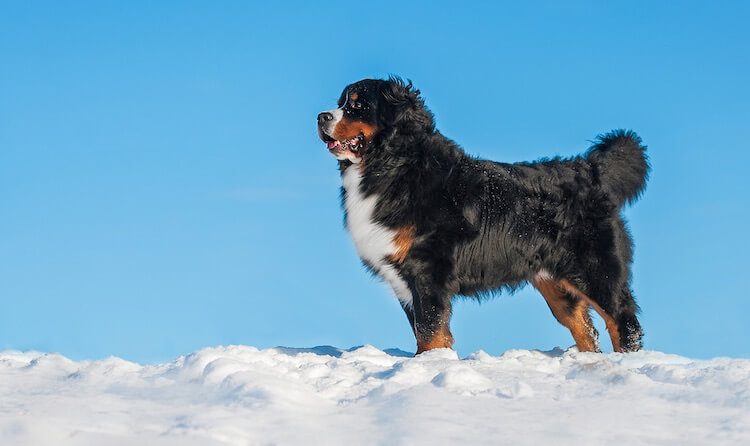 These dogs, known as Berners, are extremely hardworking and strong, as they were once used for drafting or pulling carts.

They are known for being heroic, and having a thick striking tri-colored coat.

Known for being fiercely loyal and protective companions, they are also great for being guard dogs.

The Berner’s ancestors were brought to Switzerland by Romans many centuries ago, and their name is derived from the Canton of Bern.

A Bernese Mountain Dog is a part of a group of three other Swiss Mountain dogs:

These canines were bred from Mastiffs and other guard-type breeds to create hardworking and tough animals.

In the late 1800s, this breed was almost brought to extinction, due to advancements in farming practices and transportation, along with the St. Bernard’s growing popularity with the Swiss.

An innkeeper by the name of Franz Schertenleib, was able to promote this breed across not only Switzerland but the rest of Europe, essentially saving the breed.

These brawny athletic canines have now been developed into the perfect farm dog.

They are able to pull carts, guard farms, and drive/herd animals.

The breed became both a great companion and a worker in the early 1900s and they soared in popularity once brought to the United States.

In 1937, the breed was officially recognized by the American Kennel Club, and in 1968, the Bernese Mountain Dog Club of America was formed.

This dog is a member of the working group, as they are notorious for their keen sense of pulling and drafting.

They were also bred to withstand the cold of Switzerland, with their long, thick double coat.

Berners can have litters of puppies that range from 1 to 14 puppies, but the average litter size is 8.

Due to their amazing temperament and working ability, they can range in price from $800 to $2,000 USD per Bernese Mountain dog puppy.

However, if the puppy comes from a superior lineage (e.g. working pedigree), the price can jump to as high as $10,000 USD.

Berners become much, much bigger as they continue growing from puppyhood to adulthood.

When it comes time for the puppies to leave their mom, around eight weeks of age, these guys can weigh as much as 24 pounds.

This dog will continue filling out and bulking up until they are about 2 or 3 years of age. 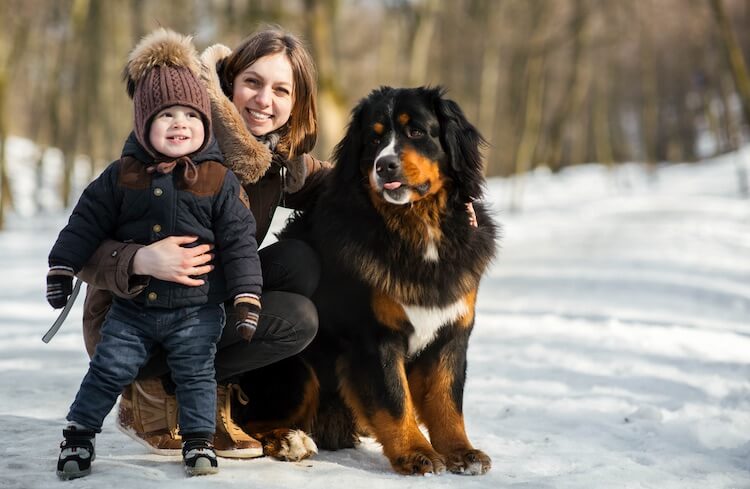 On a whole, this breed has an extremely stable and easy-going temperament.

They can either be a lazy couch potato or an extreme athlete!

Extremely intelligent and eager to please, they are a very easy to train breed if their owner is patient.

Around strangers, the temperament of a Berner can vary from very friendly and happy to shy and aloof.

One of the most prominent behavioral problems is excessive shyness.

This can sometimes be focused towards a certain group of people or just people in general; however, with early socialization, this timidity can be avoided.

Another problem that owners can face is separation anxiety, so it is very important to not leave your pet alone for excessive amounts of time whilst they are a puppy.

The Bernese Mountain dog is known for being a sweet and affectionate companion who is extremely high-energy and playful.

They are also known for being very loyal and protective, especially over the children of the family.

The Bernese Mountain Dog is the perfect canine for a family pet!

They are sweet, gentle, and protective animals, and are prone to bond especially closely to the children of the family.

Because of this, they make extremely good watchdogs and protectors and can be very loyal.

Most of these canines, with early exposure, can also get along extremely well with other small animals, making this breed a wonderful household pet.

The only downside to the Berner is the climate that they can withstand.

With their double coat of thick silky fur, they definitely need to be in a cooler climate, or kept inside for most of the day.

This breed can easily overheat if outside for too long, and they should be monitored if they are outside whilst playing in the heat.

If you are a very active family, have kids or other pets, the Bernese Mountain Dog could be the perfect addition to your family. 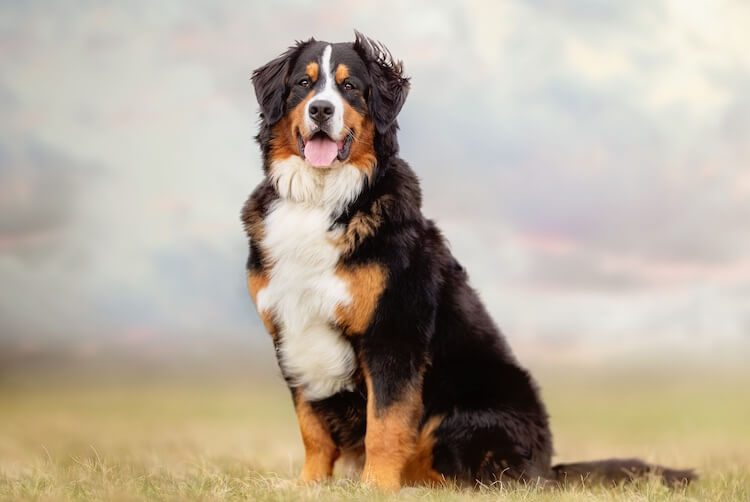 These canines are striking in their appearance.

They have a strong and agile body, as they were originally bred for driving through the cold weather and snow of Switzerland.

These dogs are considered a large breed and are built for hard, prolonged work.

Male Berners are much more masculine and strong in appearance, whereas the females are a bit smaller and more feminine in shape.

Although they are known for their big, almost hulk-like appearance, they are not always like this.

Known for maturing a little slower than other breeds, not reaching their adult weight and height until they are in between 2 and 3 years of age, at around 18 months of age they have a gangly teen-like appearance.

During this time, they may be a bit more clumsy and uncoordinated, but as they continue to grow into their frame, they grow the characteristically long thick coat and the bulky body shape that everyone loves.

A fully grown male Bernese Mountain dog can be around 25-28 inches in height and will weigh between 80 to 115 pounds.

Females are a little smaller and are 23-26 inches in height and between 70 to 95 pounds.

With these canines being so large, and a working breed, their life expectancy is 7 to 10 years of age. 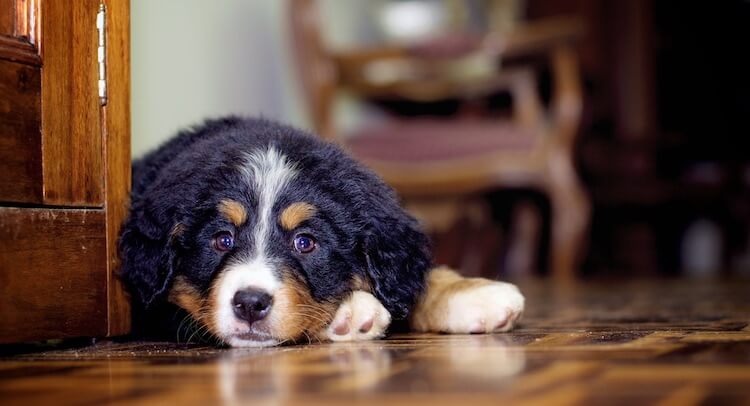 According to the American Kennel Club, this breed should be tri-colored, meaning they are mostly black with rust and white markings.

They have distinctive rust-colored markings above their eyes, sides of their mouths, the fronts of their legs, and some around the white of their chest.

This breed is known for an intelligent gleam in their eyes!

These dogs have a thick coat, which should be long and sometimes wavy.

Usually, their coat is very sleek and shiny. A curly, or a dull-looking, coat is very rare and is not desired by the breed standard.

Berners are known for their thick double coat.

This makes them very heavy shedders and not hypoallergenic!

They do need regular brushing, due to their high amounts of shedding, but baths and frequent clipping is not a necessity.

To keep them from getting mats and snarls, they will need a few trips to the groomer each year.

Berners are also known to be a bit slobbery, so it is important to know this before adopting one of your own. 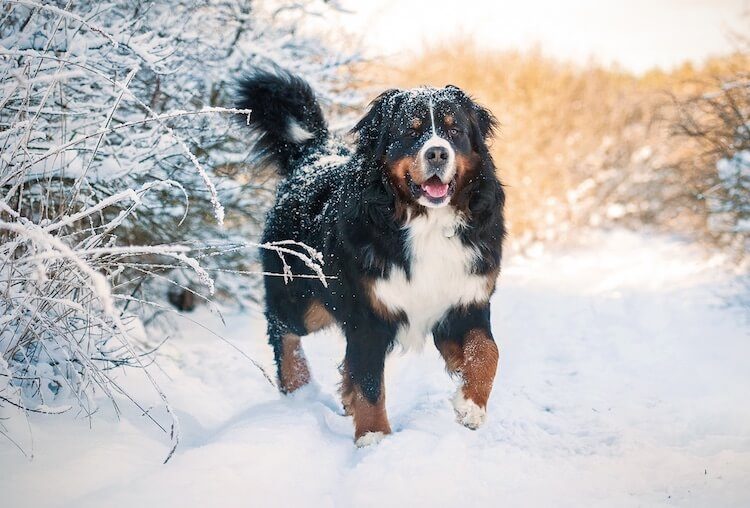 Like any pet, it is extremely important to feed your dog a balanced and nutritious diet.

A well-balanced diet can keep organs and tissues healthy, which can in turn help boost your dog’s immune system.

Problems with diet can also cause the health of your dog’s skin, ears, and eyes to decline.

A healthy diet, one that also keeps your dog at a healthy weight, will help to extend the lifespan of your pooch.

As far as dietary requirements, the Bernese Mountain Dog will require different food sources depending on their job:

Most kibble and dry dog food will be sufficient for your pet, however these canines also love fruits and vegetables, cottage cheese, and other healthy, fresh foods.

Make sure to keep fresh treats and snacks less than 10% of their total daily diet. Any more than that, or other table foods/scraps, can cause them to rapidly gain weight.

Rooted in a history of exercise and hard work, the Bernese Mountain Dog needs at least daily exercise to keep them at a healthy weight.

Destructive behavior from this breed is caused by boredom more than any other factor, so it is important to get this daily exercise in.

A simple walk or time to play and run in your backyard will be sure to keep your dog happy and healthy!

Even though Berners are very intelligent dogs, the breed matures a little slower than other canines; both mentally and physically.

Despite this, with lots of praise and encouragement, most of these canines train very well and become very obedient dogs; especially if they are given an active job. 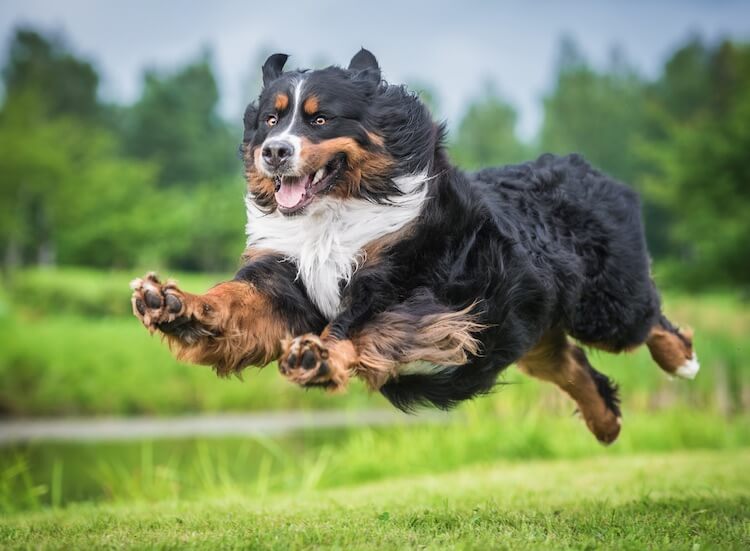 Much like most other large breeds of dogs (Russian Bear Dog, Alaskan Malamute, Anatolian Shepherd Dog to name a few), these canines are prone to bloat and hip dysplasia.

They are also prone to some forms of cancer, one of these being histiocytic sarcoma, and joint issues.

Bloat is the catch-all name for two different disorders of the canine stomach:

The best way to prevent bloat in your dogs is to keep them at a healthy weight, because obesity is one of the biggest causes of these diseases.

Hip dysplasia is another common health problem in this breed, it is a condition in which the ball and socket of the hip joint does not fit together, causing painful grinding of the bones against each other.

This causes the joint itself to deteriorate, much like how the grinding of teeth can deteriorate the enamel, and can cause the loss of mobility in that joint.

Lastly, histiocytic sarcoma is an aggressive form of cancer affecting a type of immune cell.

This cancer can affect either multiple places in the body or an isolated area. This cancer is most heavily present in the joints of dogs, causing tumorous masses.

Even though there are a few health conditions that Bernese Mountain Dogs are susceptible to, for the most part they are relative healthy breeds who have a lifespan of between 7 to 10 years of age.

In summary, if you are a part of a family who live in a cooler climate, with an active lifestyle, this could be the perfect dog for you.

This breed is an intelligent, athletic, lovable and loyal family companion.

If you have the patience for training these loveable goofballs, you will not regret the years of companionship from this incredible dog.

Let us know in the comments below, what do you think about the Bernese Mountain Dog? Could this be the newest furry addition to your family?

Every dog owner knows a Weimaraner when they see one. Easily identifiable by their long legs, silver coat, and goofy expressions, these dogs have a long and regal history. Sometimes known as Weims, this breed originated in Germany as a hunting dog. They are now Continue Reading →

Mastador: What It’s Like to Own a Mastiff Lab Mix

The Mastador is a designer mix between a Mastiff and a Labrador Retriever, meaning this dog is a gentle giant who is well suited to family life. These dogs are loving and energetic, due to the traits of their parents, and are fiercely loyal guard Continue Reading →