Another designer cross-breed we hear you ask, so what is different about the Australian Labradoodle?

Would you be surprised to hear, that what most people know as the Labradoodle is actually the Australian Labradoodle?

In fact, the Australian Labradoodle doesn’t even have any Australian in him! His name simply comes from where he originated.

He was bred to be the world’s first hypoallergenic guide dog, for visually impaired families who were allergic to dogs by the Australian Guide Dog Services.

If you want to learn everything you need to know about this beautiful dog, keep on reading our 21 incredible facts.

They love everyone, and generally everyone loves them.

Take them out into the world and let them experience what it has to offer, in a safe and controlled way.

Ask your puppy’s breeder what dog socialization plan they had in place and continue with your dog from there.

Introduce them to people of all shapes and sizes; those wearing hats, coats and helmets. Let them meet other animals: farm, working and domestic.

Praise and reward your dog after each positive meeting, they will soon learn that all these new things are pretty cool, because something good happens when you are around them.

A well socialized Australian Labradoodle is important as many people, children included, will want to pet them and love them.

2. They Were First Bred As A Non-Shedding Guide Dog

This breed has been around for at least 30 years now.

Remember the story of why the Labradoodle was bred, as a non-shedding guide dog? Well, that was actually the Australian breed (i.e. this dog).

In 1989, Wally Conron, the breeding manager for Guide Dog Services in Australia produced a litter of puppies for a visually impaired family who was allergic to dogs.

After several attempts at breeding Poodles with Labrador Retrievers, he finally produced a puppy with an allergy-friendly coat – it was this coat that made it so popular with the general public.

3. They Are The Best Of Everything Mixed Together

The Australian Labradoodle is more than a Labrador crossed with a Poodle, it has several ancestors.

To get the smart and trainable dog you see now, American and English Cocker Spaniels were thrown into the mix, along with Irish Water Spaniels and Wheaten Terriers.

The standard Labradoodle, on the other hand, is just a Labrador crossed with a Poodle, with no other breeds involved.

4. The Australian Labradoodle Is The Perfect Family Pet 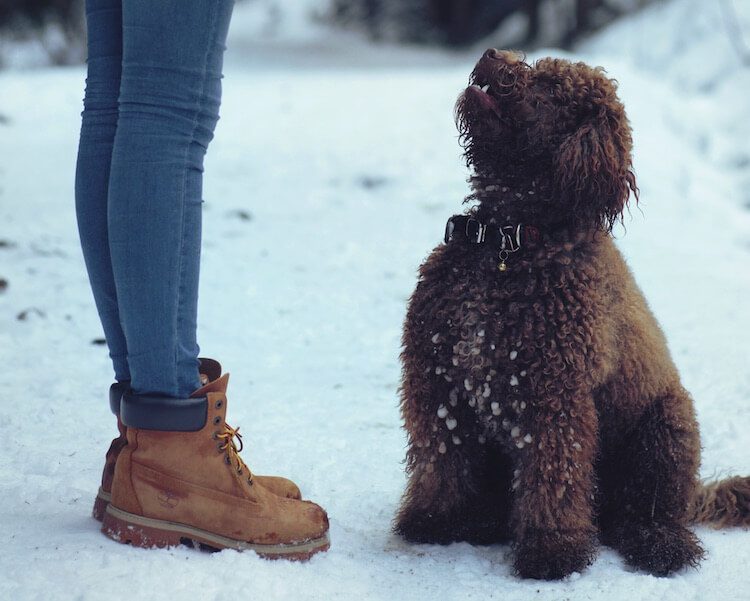 Known as perfect family dogs, being energetic and playful, but, equally even-tempered around younger children and babies.

When sourced from a reputable breeder, and with the correct training and socialization, you couldn’t want a more stable dog and loving dog.

5. They Have A Reliable Temperament

As this dog is a mature designer cross-breed and has been around for over three decades, their temperament is often predictable.

The unpredictability with cross-breeds occurs generally with first generations (known as F1). Whilst you can’t be 100% sure of which characteristics your puppy will inherit, later generations produce more stable dogs.

6. There is a Mini Australian Labradoodle

Like most Poodle Mixes, they are generally described as either:

7. They Have a Beautiful Chocolate Fleecy Coat

They tend to come in any color that Poodles or Labradors do, but, most commonly:

They are known for their fleecy coat (this will either be straight or wavy) and some are known to have a wool-type coat.

These dogs can have a range of markings including:

8. They Aren’t Even Australian

The Australian Labradoodle doesn’t actually have any Australian breeds in him, the name simply comes from where he originated.

9. She Is Smart and Energetic

As we’ve mentioned, the Australian Labradoodle is a result of generations of cross-breeding which includes purebred dogs such as the: Labrador Retriever, Poodle, and both the American and English Cocker Spaniels.

Poodles are very people-orientated dogs meaning they are incredibly eager to please. They thrive in positive training routines and to this day excel in activities like agility, obedience, and tracking.

The Irish Water Spaniel is playful and hardworking and they likely brought their coat and size to the mix too.

Soft Coated Wheaten Terriers are loved for their low-shedding coat and beautifully soft wavy coats. Wheaten terriers are wholeheartedly devoted and gentle with their family.

10. He Will Need More Haircuts Than YOU 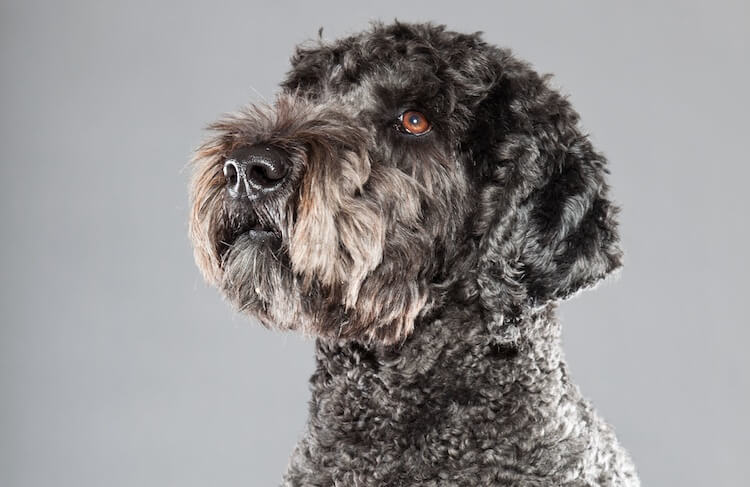 Breeders suggest that the Australian Labradoodle should attend the grooming salon every 5-6 weeks, with daily brushing at home in between – this is due to their thick, wavy coat.

This pooch will need to get used to being groomed.

He is prone to knotting and matting, so it’s more comfortable for them if their coat is well-managed.

Some owners like their coats a little longer, others will clip them shorter. Shorter coats are less maintenance at home, but like many doodles, there isn’t a solid grooming standard yet.

On the subject of grooming, you will need to ensure you clean his teeth several times and week, and regularly check his eyes and ears – don’t forget his claws either.

11. This Designer Pooch Is Highly Trainable

Despite the generations of selective breeding to produce a gentle, well-mannered and eager-to-please pooch, owners don’t get away scot-free. Here are some puppy training tips to help.

You are always responsible for raising, socializing and training your pup!

Like all dogs, they respond best to positive reinforcement and reward-based training.

Encourage the behavior you want to see and reward it – dogs learn through the consequences of their behavior. Ignore unwanted behavior and avoid using alpha or aversive techniques at all costs.

12. They Were Bred From Curly-Coated Retrievers

Now we’ve mentioned the range of breeds that have, at some point been used in the creation of the Australian Labradoodle.

We know that the curly coated retriever was also bred into the lines. It’s unclear what was disliked, but this addition didn’t last long.

13. The Australian Labradoodle Is Low Shedding

Like most Poodle mixes, this dog is touted as a hypoallergenic dog – it is not guaranteed that allergy suffers are completely safe.

Their coat is low shedding and curly/wavy, this means that dander is trapped within the coat so doesn’t float around the home as easily.

For those lucky few, they will get all this breed has to offer: intelligence, love-ability, and hypoallergenic.

However, humans can be allergic to dog saliva, and therefore no “low allergen” dog is a safe choice – all dogs have saliva.

14. They Are Happy and Healthy Dogs

If you are looking for an Australian Labradoodle, you should search for a reputable breeder with a history.

To ensure you get a healthy Doodle you should carry out the recommended health tests on both parents:

Despite the above tests, some dogs do get through the net which means you’re not guaranteed a totally healthy dog. The most common health issue associated with this breed is exercise induced collapse.

Ensure you feed your pooch a good quality food that meets his daily nutritional requirements; especially protein and fat.

Protein is vital to cell growth, repair, and function and fat is an essential energy source.

You need to know what size your breed variation is, whether they are miniature, medium, or standard, as what you feed him as a puppy depends on his predicted adult size.

The Australian Labradoodle has been selectively bred over decades to produce an even-tempered, playful, and friendly companion for any family.

They are not recognized with any Kennel Club, it is unclear whether existing breeders will eventually consider working towards pure-bred registration.

Reputable breeders are a must if you are considering one of these guys.

A perfect family companion, whose intelligence and eagerness to please make them a dream to train. Playful enough for the kids, but, equally gentle for the toddlers – you really couldn’t want a more mild-mannered pooch!

With early and continued socialization and training, you will have a happy-go-lucky companion, just make sure you check out the breeders. Purchased this breed recently? Leave us a comment below.

If you’re interested in learning about other Lab mixes, Poodle mixes, or Cocker Spaniel mixes, check out the hybrid dog breeds below.

About John Woods 301 Articles
John Woods is the founder of All Things Dogs, member of the Association of Professional Dog Trainers, graduate in Animal Behavior & Welfare and recognized author by the Dog Writers Association of America.
Facebook YouTube

Irish Doodle: A Complete Guide to the Irish Setter Doodle

A happy-go-lucky, over-sized teddy bear, the Irish Doodle is the less common cousin to the Goldendoodle! Very similar in appearance, but often darker in color, this dog is a result of mating an Irish Setter with a Poodle. Graceful and athletic with a superb nature, Continue Reading →

Blue Heeler Dog Breed Information: Everything You Need to Know

The Blue Heeler is a unique and special herding dog from Australia. Straight from the outback they are widely known as ‘Heelers’ for their habit of nipping at the heels of cattle. They make great farm and ranch dogs with their hard-working nature and can Continue Reading → 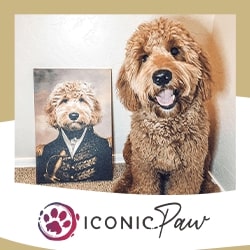