Although the Lhasa Apso is only 11 inches tall, they are known for having the heart of a lion!

This breed originated in Tibet and was a watchdog for households and temples, guarding those who lived in the city of Lhasa.

Lhasa Apsos are thought to be one of the oldest breeds in existence and can be traced back to 800BC.

Fans of the breed love them for their feisty and independent nature. They make a great match for people looking for a hardy lapdog who barks at anything suspicious.

These vigilant little watchdogs can make brilliant pets, but only in the right home. Here are 12 must-know facts about the breed. 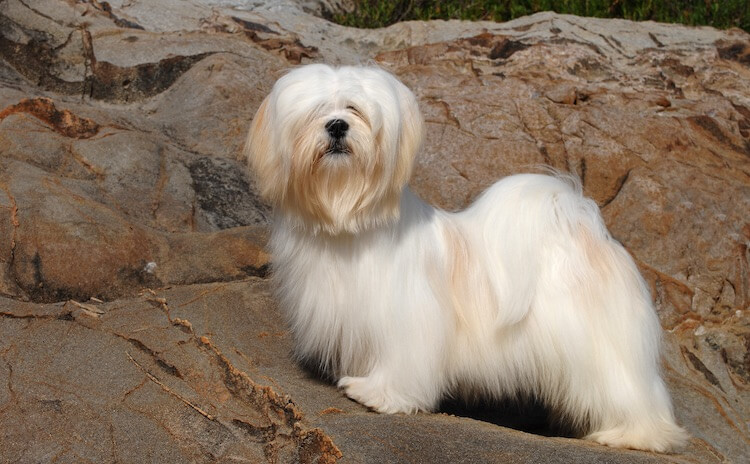 The Lhasa Apso originated in Tibet around 800BC. This makes them one of the oldest dog breeds in the world.

Their role was to act as a watchdog. They would watch temples and households in the city of Lhasa.

Although they have an ancient history, the Lhasa Apso was first seen in the United States in 1933. The breed was first recognized by the American Kennel Club in 1935 and was categorized into the terrier group.

Once the Lhasa Apso Club of America was formed in 1959 the breed was later re-categorized from the terrier group to the non-sporting group.

Roughly translated, their name means “Bearded Lion Dog” and refers to both their appearance and tenacious temperament.

Owners report their dog as being protective and faithful. There is a famous saying among owners, “A Lhasa Apso looks in the mirror and sees a lion.”

An interesting quirk of the breed is that they enjoy resting at higher vantage points; often found sitting on window sills or the back of couches!

10. Their Coat Should Flow To The Floor

The American Kennel Club’s breed standard stipulates that their coat must be “of a reasonable length.” However, if you wish to show your dog, a floor-length coat (i.e. full coat) is required.

The Lhasa Apso’s coat requires a very careful cut. Because of this, grooming should only be done by a professional or experienced owner.

These dogs need brushing from nose to tail every day to maintain a healthy coat. Their coat should be brushed through in sections. This will ensure all the tangles are removed.

One interesting fact for potential owners to note is that their coat is considered to be hypoallergenic. This makes them suitable for owners who have allergies to pets.

Your Lhasa Apso’s coat color will determine how frequently they need bathing:

As well as frequent grooming, due to their slightly flatter faces, dental care is especially important for this dog too.

Teeth should be brushed as frequently as your dog will allow, ideally every day.

In order to help you groom this breed frequently, it may be a good idea to teach choice-based games, such as the bucket game. This will lead to a much happier experience during grooming (i.e. clipping and brushing).

The Lhasa Apso is a sturdy breed.

Classified as a small breed of dog, they typically stand between 10 and 11 inches tall. Females are slightly more petite than males, but both sexes will weigh between 12 and 18 pounds.

They have short but strong legs, a barrel of a body and a tail that curls back over their body. Their ears are small, flat and usually lost in a mop of hair.

Their faces are similar to a Pug’s flat snout. Because of this, they are known as a brachycephalic breed. This means they have a shortened snout, which gives them a squished-appearance and potential medical issues.

Lhasa Apsos are bred in a range of different colors and patterns. Their breed standard does not specify a specific color or pattern for them to be accepted, so they are available in many different colors:

8. The Lhasa Apso Loves To Eat

This pooch is generally happy to eat anything you offer them! In Tibet Lhasa Apsos were fed scraps table scraps by families whose houses they watched over.

In modern times, these little pooches need roughly a cup of kibble each day.

The quality of kibble you decide to feed will also play a role in the quantity of food you feed to your dog. Lower quality foods tend to need to be eaten in larger quantities to gain the correct nutrient levels.

It is important not to overfeed such a small breed. Excessive weight can cause joint and mobility issues.

If you wish to give your dog lots of treats for good behavior, consider giving them dog safe fruits and vegetables as a healthy reward!

Known by their owners for being sharp and intelligent, this dog breed will master basic obedience with ease.

Like Labradors, these dogs are also known to be very food and toy motivated. Because of their food-motivation, training, especially basic obedience, is very quick when rewarded with positive reinforcement.

If they are motivated with the correct reward, they will quickly achieve basic obedience. Unfortunately, those who are not familiar with the Lhasa Apso breed often refer to them as stubborn.

Getting a Lhasa Apso to focus on training can be a task within itself, but with the right incentives and lots of praise these hardy dogs can excel at basic obedience and trick training. Once you understand which food(s) or toy(s) holds enough incentive, they will very happily do what you ask of them.

6. They Need 30 Minutes Of Exercise Each Day 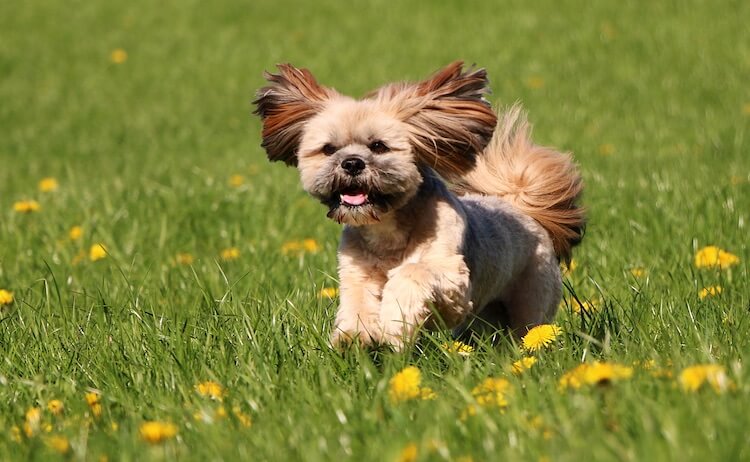 Lhasa Apsos are a small breed, so they do not need a huge amount of exercise.

On average, they will need around 30 minutes of exercise each day. This can include: walking, playing, fetch and canine sports.

While out walking your Lhasa Apso, be aware they have a high prey drive. They like to play chase and run after small animals or pets:

It is not necessary, but they often enjoy living with a family that has a large yard to run around in.

If you are planning to use this dog for their true purpose (i.e. as a watchdog), and are leaving them unsupervised in your yard, make sure it is securely fenced. Bred on the mountains of Tibet, these little dogs are surefooted and hardy, meaning they can scale your average garden fence without an issue.

5. Lhasa Apsos Are A Brachycephalic Breed

Lhasa Apsos are generally considered to be very healthy dogs. They often live for between 12 to 14 years.

The Lhasa Apsos dog is a brachycephalic breed. This means they have a short skull with a flat nose and snout. Due to their flat faces, they are prone to a few health issues:

Progressive Retinal Atrophy
A hereditary condition which causes the gradual degeneration of the eye, resulting in eventual blindness. Although the condition is genetic. With the Lhasa Apsos breed it is thought to be triggered by foreign objects, such as dirt of dust, entering their eyes. The condition can be managed with medication, but there is no cure.

Hip and Elbow Dysplasia
They are prone to two major musculoskeletal conditions known as hip and elbow dysplasia. This is where the joints form incorrectly. This results in joints that move awkwardly. Over time, this can cause other conditions such as osteoarthritis.

Juvenile Renal Disease
Juvenile renal disease is also common with this breed. The condition usually presents during the first two years of their life. The first symptom of the condition is drinking more water than normal. The condition progresses to vomiting and weight loss, eventually leading to kidney failure. The condition is managed via a specialist diet and IV fluids when required.

Progressive retinal atrophy and Juvenile renal disease are hereditary. It is possible to test the parents before breeding. However, if you are adopting a Lhasa Apso rescue, testing will not be an option available to you.

A Lhasa Apso puppy can be very difficult to find. They are something of a rare breed.

You may struggle to find a responsible breeder at first. Have patience, and expect to be on a waiting list. They are well worth the wait.

This massive price range is based on my factors such as:

Due to their larger price tag, Lhasa Apsos have found themselves the target of unethical breeding standards. To avoid this, use the American Kennel Club’s list of registered breeders.

If you would prefer to adopt a Lhasa Apso, they are very rare to find within your local rescue shelters. You should instead try the American Lhasa Apso Rescue. They re-home this breed all over the United States.

3. Historically Lhasa Apsos Were Given As Gifts 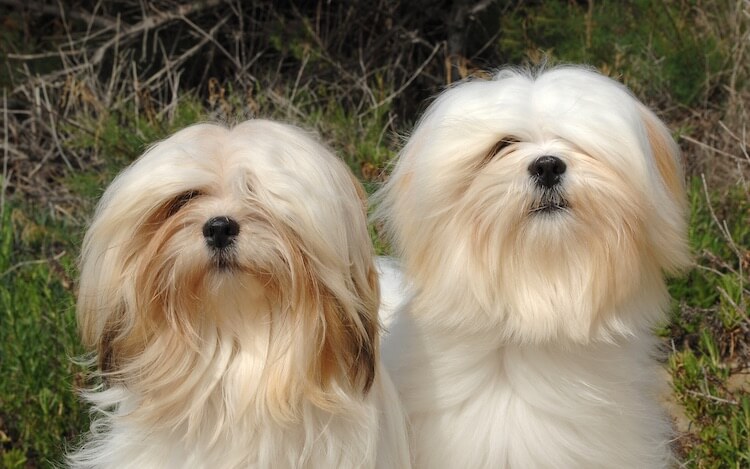 These dogs originally had huge religious significance and were closely associated with the Dalai Lama.

Lhasa Apsos were never bought or sold, instead only ever given as gifts to people in Lhasa.

This fact is one every potential owner should be aware of. They love to bark! It can sometimes feel like they are shouting at you.

As a breed, they are a unique combination; clownish and loving, yet reserved and aloof. They tend to be wary and unruly around strangers. A Lhasa Apso will only let their guard down after they decide it is safe to do so, meaning they may be standoffish with new people for some time.

Lhasa Apsos are known for their enjoyment of the louder pursuits in life, especially barking.

Something owners should understand is that their behavior of barking is an instinct! They were bred for hundreds of years to be a watchdog.

Even a very well-trained Lhasa Apso will bark. Their barking isn’t related to obedience.

If you live in an apartment block, or have neighbors in close proximity, this is something you should consider.

Though they can look grumpy at times, but they are a very affectionate and loving dog. This dog breed will do anything to make their owners happy.

They love to be around their people and are described as family pets. They carry themselves with an air of grace and royalty.

Where possible, they should never be left unsupervised with children as these fiery dogs can have a very short fuse! Homes with older children are better suited to this breed.

Is This Watchdog For You?

The Lhasa Apsos is a tenacious and protective lapdog. They make excellent companions and watchdogs.

Provided you don’t mind their relentless barking; this breed can thrive in many different locations: from the bustling suburbs to a farm in the middle of nowhere!

When keeping this dog, they do not need huge amounts of exercise, but will need to be brushed from nose to tail every day.

These dogs can do well as family pets, although they prefer to live in homes with older children. They love other dogs but don’t do well with other household pets because they have a prey drive.

Do you have a Lhasa Apso at home? Please leave us your thoughts on this brilliant breed in the comments section below.

Labradors are by far the most popular dog in America, topping American Kennel Club’s list of breed registrations for 29 consecutive years! First seen in Canada as the “St John’s Dogs,” Labradors were used by fishermen to haul in nets and help with their process. Continue Reading →