What happens when we mix 50% sass with 50% spirit? A Pomchi is what happens.

A designer hybrid is a result of mating a Pomeranian with a Chihuahua.

Standing between 6-9” in height, weighing in between 5-12lbs, this tiny package carries a huge personality!

Let’s learn a little more about them, their origin and what it takes to look after them on a day to day basis.

What Is a Pomchi? Breed Overview

The Pomchi dog is the result of mating a Chihuahua with a Pomeranian; two purebred dogs. Due to the similar size of the breeds, the dam and the sire are interchangeable.

A First generation Chihuahua Pomeranian mix is 50% Pomeranian and 50% Chihuahua offspring. As the generations move on, breeders may breed a full Pomeranian or full Chihuahua with a Pomchi, or they may breed two Pomchis. The idea of breeding two Pomchis is to have a better idea of their potential temperament, as we have done with purebred dogs.

With a cross-breed you can never be entirely sure of the dog you will end up with. You may end up with more Pom than Chi or more Chi than Pom.

Origins of the Pomchi Dog

This designer mix is not a purebred dog with pedigree so they aren’t recognised by any major Kennel Club. They are a designer cross breed of a Pomeranian and Chihuahua.

Recognized by the American Canine Hybrid Registry as a Chiranian and also by the Designer Canine Registry as a Pomchi this affectionate and independent mix has received a steady interest over the last decade.

As with all breeds as their popularity increases, more and more Pomchis are finding themselves in shelters, so rescue is also an option.

Pomchi’s Parents: The Chihuahua and Pomeranian 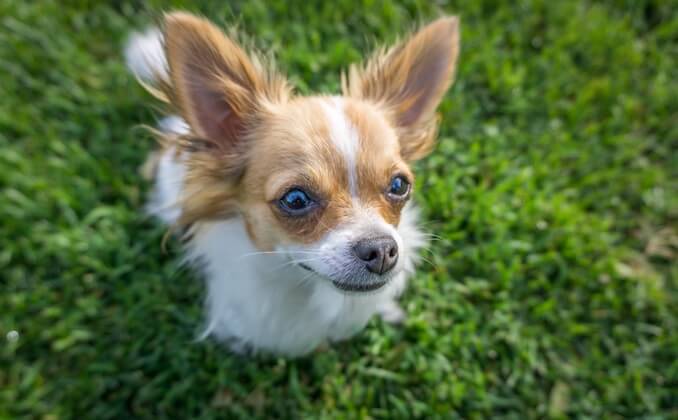 The Chihuahua is a high spirited, intelligent and alert little guy. Their small size completely deceives their larger than life personality.

They lived on after the Toltec era and a large number of them were found by the Americans in the State of Chihuahua; which is where he got his name from.

Described by All Things Dogs as sassy, you needn’t say much more. The Chi is stubborn, charming and loyal. A huge character in a small body with the feistiness to match any terrier! 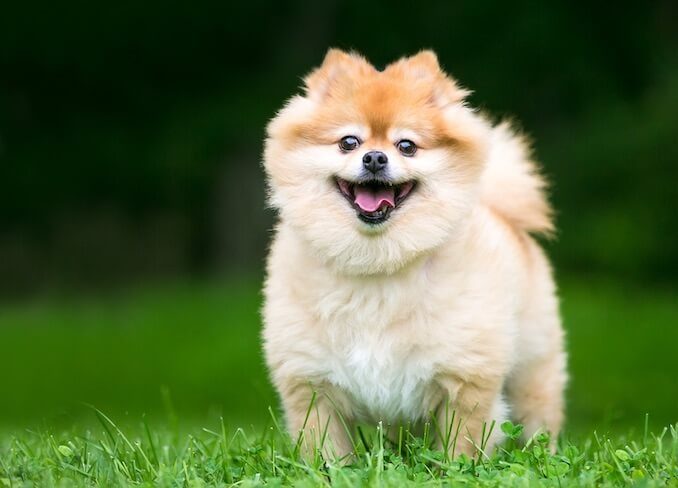 Described by the American Kennel Club as inquisitive, bold and lively the Pomeranian is a distant relative of the Arctic Spitz dogs (sled dogs).

The breed can thank Queen Victoria, from England, for its popularity as during a visit to Italy, she fell in love with them and swiftly brought them home to Britain. Queen Victoria went on to show her Poms at Crufts, creating a regal bearing.

Poms have been loyal companions of Thomas Edison, Mozart and Michelangelo.

Alert and intelligent, these feisty little guys are super watch dogs. Energetic and lively, they enjoy being active, but they don’t need endless miles of walks.

So we cross the bold, alert and intelligent Pom with the sassy, stubborn and feisty Chi and what do we get? A Pomchi with character to boot. He will certainly keep you active and entertained.

Standoffish is probably the best word to describe a Pomchi Mix with strangers. They are alert, inquisitive and will certainly let you know if something is out of place. Some owners struggle with their barking tendencies and describe it as excessive.

Not only do they bark at noises, knocks or the pipe creaking, Pomchis will also bark if left alone for long periods of time. Due to their affectionate nature, they don’t cope with being alone:

Avoid leaving them for long periods by asking friends or family to pop in or seek out a dog walker.

When with their family, Pomchis are a very affectionate dog, like their Pomeranian parent.

They tolerate adults much better than children though. This designer toy breed is best suited to adult only homes or families with older children because of their small toy size. We’ve mentioned their love of curling up on the sofa – to be honest, this is where you will find them most of the time.

Despite their lively and inquisitive nature, they don’t need hours of exercise. They are quite happy running around the house or in the yard. Walks of around 30 minutes are ample, however, their stubborn nature can leave their recall less than desirable – keep them on a leash when out walking.

If socialized from a young age, Pomchis tend to get on well with other animals, yet due to their feisty nature, it would be advisable to supervise interactions. Watch their body language to predict any potential problems.

How to Care for a Chihuahua Pomeranian Mix

Their independent nature, which craves attention, throws up some things to be mindful of when caring for this loving pooch.

Like other Chihuahua Mix dogs this mix is best suited to adult only homes, or those families with older children.

How to Feed a Pomchi

Both Pomeranians and Chihuahuas are known to be fussy eaters; it is possible that your Pomchi has inherited this quality.

It may take you a while to find a food that suits your pooch, speak with your veterinarian or find a dietician to help if you are struggling.

Ensure the food you are feeding meets your dog’s daily nutritional requirements, he will need:

Check the labels of his food match these requirements. He will eat on average 40 calories per lb of body weight per day, so if your pomchi weighs in at 8 lbs, he will need:

It is incredibly easy for any dog to put on weight, smaller dogs are no exception. You can use the puppy growth chart below to manage their weight:

Try to avoid feeding table scraps as it is more difficult to monitor how much he is eating. If you do want to include healthy human foods in their diet, use some healthy fruits, and swap out some of his daily allowance to accommodate.

As we’ve mentioned, these guys fall pretty low on the exercise requirements.

They are more than happy running around the house or the yard, but, are partial to a walk around the block. 30 minutes would be ample, so, for this reason, they are perfectly suited to apartment and city living.

Their stubborn nature leads most owners to keep them on their leash; their recall leaves a lot to be desired.

A Pomchi mix is most happy spending time with you, whether this is pottering around the house, sitting in the yard or catching up with your TV shows!

How to Train a Pomchi

Like all dogs, this pooch responds best to reward based training (i.e. positive reinforcement).

When he’s behaving as you want him to, praise and reward him. Food and toy treats are perfect. If he responds better to food rewards, swap out some of his daily food allowance to accommodate. You can also try playing and praise as rewards.

He will learn that when he behaves a certain way, something good happens. He’s then more likely to repeat that behavior; this is known as operant behavior it’s how dogs learn.

Due to the stubborn nature of his parents, especially the Chihuahua, the Pomchi can be difficult to train difficult; patience is key!

It is well established that aversive training methods can create and exacerbate problematic behaviors in dogs, so avoid using punishments.

As we mentioned earlier, barking can become problematic in this mix. We have some handy tips to manage excessive barking:

Just like their parents, a Pomchi dog is prone to certain health issues including:

If you have any concerns with your dog’s general health and wellbeing, speak with your veterinarian.

Often described as fox like in appearance, the Pomchi can look more Pomeranian than Chihuahua or more Chihuahua than Pomeranian – you never truly know what you will end up with in a cross breed.

They come in a range of colors including black and tan, sable, fawn, chocolate and blue and tan; however, we haven’t yet seen a pure black pomchi. The most common colors are fawn and sable.

Small in size, between 5 – 12lbs in weight and standing up to 9” in height, males are generally larger than females. They tend to have pointy, erect ears with the very typical fox like snout.

Coat type varies, they can have long, short, dense, thin, double or single coats with pomchis shedding isn’t a big issue. However, both of its parents have two seasonal blowouts; so expect this from your designer mix too.

Regular brushing will keep their coat knot and matt free. Check their ears and eyes over when grooming as we know they do suffer with their eyes.

Tempted with this alert, intelligent and sassy pooch? He will certainly keep you attentive and alert. Not being excessively active, he will happily run around the house and yard, with a short walk around the block.

The Pomchi is perfectly suited to apartment and city living; in an adult only home or a family with older children who understand that dogs need their own space too.

An impressive watchdog, these guys are known for their barking, especially if left alone. They can be standoffish with strangers, but once they have accepted you, they will be your lap dog for life.

When socialized from a young age they cope well with other animals; just remember their bold and independent nature and watch for any potential disasters when meeting other animals and dogs.

Black Mouth Cur: Everything You Should Know About The Southern Cur Dog

Historically a working dog, the Black Mouth Cur isn’t for first time dog owners. High in energy and tenacity, he is super intelligent and trainable. When loved by the right owners, he is the perfect family dog, but only for those who understand what he Continue Reading →

Beagle mixes are an ever-popular hybrid who are known for their energy and enthusiasm for life, making them a family favorite. Traceable as far back to 16th century England, this breed was first used for hunting rabbits and other small animals. Often seen in packs, Continue Reading →

Labradors are by far the most popular dog in America, topping American Kennel Club’s list of breed registrations for 29 consecutive years! First seen in Canada as the “St John’s Dogs,” Labs were used by Fishermen to haul in nets and help with their process. Continue Reading →

Blue Heeler Dog Breed Information: Everything You Need to Know

Shih Poo: Everything You Need To Know About A Shih Tzu Poodle Mix

Best 32 German Shepherd Mixes: A to Z List and Pictures