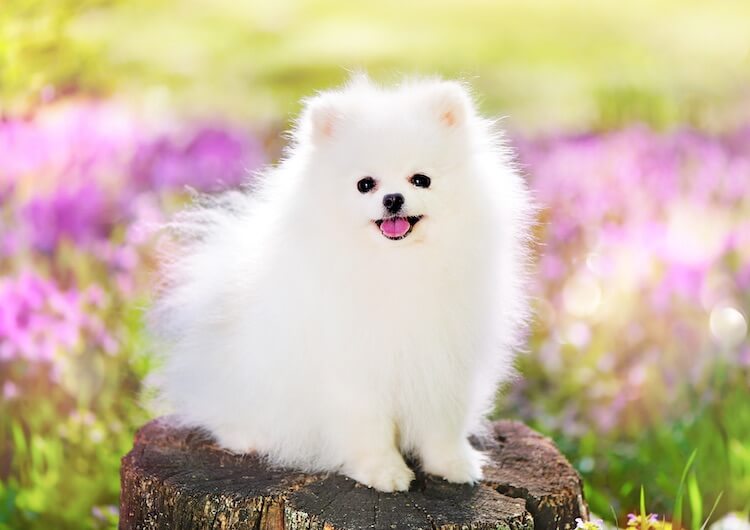 Often confused with the Japanese Spitz, a White Pomeranian is simply a Pom that has a purely white coat.

Being classed as a Spitz dog, it is very easy to see where the confusion lies, however, a Pomeranian can be spotted by its slightly shorter muzzle!

Adored by royalty since Queen Victoria adopted a red one, their friendly and lively nature make this dog a loving companion.

Intelligent and alert, with a huge personality in a small body, lets take a look at everything you need to know about the white Pomeranian. 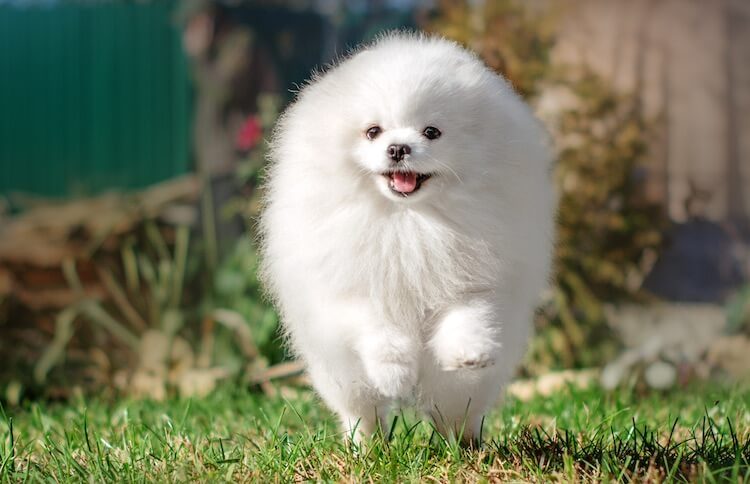 The Pomeranian is adored for his inquisitive, bold and lively nature.

They are classed as a Toy Breed by the American Kennel Club and are the perfect companion for: singles, couples, the elderly and those families with older children who understand the needs of a toy pooch.

The White Pomeranian is known for being a brilliant watchdog, and will engage in a range of dog activities, but this breed just wants to be wherever their human is.

This dog is named after its location of origin, Pomerania (an area in Northeastern Europe which is now part of Poland and Western Germany).

The White Pomeranian was bred from its Spitz ancestors, to become the lapdog you see today.

The Pom gained its popularity after Queen Victoria fell in love with them on a visit to Italy.

After her trip she became a breeder and exhibitor of Pomeranians even taking them to Crufts in 1891.

Queen Victoria was part of the reason this breed have their current toy classification as it is believed she reduced their size by 30 pounds during her time breeding them.

It is believed the White Pomeranian was first seen in the US as far back as 1892, but they weren’t officially recognized by the American Kennel Club until 1900. This dog is also recognized by:

It is clear this dog is loved world over and they even have their own owners club.

For a range of reasons, the White Pomeranian may find their way in to shelters. So if you are looking to bring a pooch into your home, you may consider adopting from Pawsitively Pom Rescue or Recycled Pomeranian Rescue. 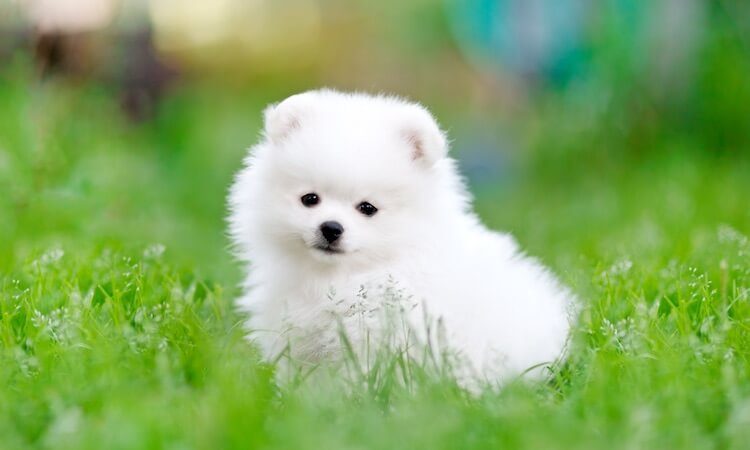 Newborn Pomeranian puppies are no more than a couple of ounces when born and they have the most rapid growth during the first month (usually doubling in size in just a few days).

Litter sizes vary but are generally between 1 to 5 puppies.

This dog is usually matured by the time they are 1 year old. How large they grow will be determined by genetics, nutrition, activity level and health:

Like many toy breeds, the Pomeranian is just as much of a challenge to house-break, so you will need to have lots of patience with this little canine.

This dog is active, but due to their small size, they are more suitable for city living.

Be mindful if you do have neighbors close-by, some owners report their barking as excessive, but often this can be well-managed with some specific training.

Not known to be aggressive, this isn’t to say they can’t become snappy and yappy without the correct socialization and training.

Like all puppies, the White Pomeranian requires early introduction to the world as they are at the risk of developing small dog syndrome with their stubborn streak!

The Pom isn’t renowned for having an issue chasing small prey, but, like with all dogs, managing their environment is key to avoiding unwanted behaviors.

This breed is a brilliant housedog, they tend to view most things as a threat, so it is important to find the time to introduce them to friends, family, the mailman and regular delivery drivers.

It is often said, that White Pomeranians mimic the behavior of their owner:

The Pomeranian is a great companion, they just love being with their human and will play, hike, cuddle and relax with them.

Originating from larger sled dogs, they haven’t forgotten their heritage and have retained their protective nature.

They are renowned barkers and will certainly let you know if something is out of place.

The White Pomeranian is generally quite tolerant of other animals, pets and kids in the home (if raised with them).

They are better suited to older teenagers, who have an understanding of the needs of toy dogs and their fragility.

Toddlers can rough-house smaller dogs which can be very dangerous.

Pomeranians adore their humans but are wary of new people and strangers.

The White Pomeranian is often described as fox-like in their appearance as he has dark, bright eyes and small erect ears.

They are a square breed with a short back.

Their tail is high and lies flat on the back; they are sturdy and medium-boned.

The White Pomeranian is a toy breed.

They generally grow to between 3-7 pounds in weight and will be around 6-7 inches tall.

Known for being a compact breed, however, their fur makes them appear much bigger!

The Pom as a breed comes in a range of colors and patterns, but the White Pomeranian is as pure as snow.

No shading of cream or yellow is allowed, so the White Pom is exactly that.

Their eyes are black, their nose is black and their pads are black. 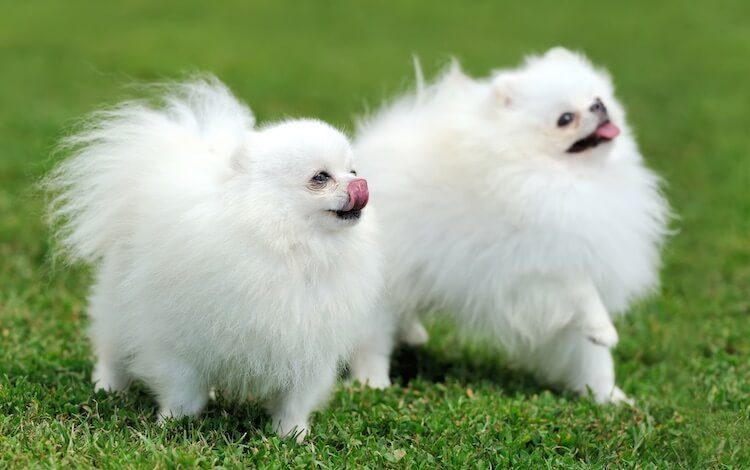 The White Pomeranian is a double coated breed, this means they have a short, dense undercoat with longer guard hairs to protect them from the elements.

Their hair forms a ruff around the neck, looking almost lion-like.

Like any double coated dog, they will have two major blow outs a year, but in reality, they never stop shedding!

Daily brushing is a must if you want to keep their elegant coat in tip top condition.

Make sure you spend some extra time brushing his ruff and tail – that is where the undercoat will become impacted if you don’t.

You may book him in with a groomer to have his feathers and feet trimmed occasionally!

Whilst you are grooming your dog, check his teeth and brush them regularly.

Keep an eye on those nails too and trim them if needed.

Most dogs keep their nails down by walking on tarmac or concrete, but you are always best keeping your eye on them. The end of the nail should be in line with the pad, any longer and it can cause pain and issues when walking.

This breed is best suited to couples, singles, older owners or families with teenagers who understand the needs of small dogs.

They are an active breed, but due to their small size fall a little lower on the daily exercise chart (however, the saved time will likely be spent grooming their incredible coat)!

Their small size shows when you are checking your monthly food bill, this little guy doesn’t eat much at all!

When choosing a food for your puppy, buy the best quality food your budget allows and ensure it meets his daily nutritional requirements.

Protein and fat are the most important things in a dog’s diet:

You will need to feed your White Pomeranian around half a cup of kibble (split into three meals).

Pomeranians are active breeds, but only in relation to their size.

Between 30 to 60 minutes of exercise per day is more than enough to keep this little guy happy and healthy, he would likely walk more though if that suits your lifestyle.

When he is out in the garden, be sure to have puppy-proofed it or keep a hawk eye on him.

This dog is renowned for escaping through small holes and taking a jaunt in the neighborhood. They can also be mistaken for Rabbits by large predatory birds.

Whilst they are trainable, they can be stubborn so its always best to walk your White Pomeranian on a leash – just in case they decide they’d rather not work on their recall today!

On the subject of training, White Pomeranians are intelligent, this does make them great candidates for a range of activities like: agility, rally or obedience.

They are sometimes difficult to house train so patience is a must, here are some of our favorite tips:

The White Pomeranian responds to positive reinforcement and reward-based training.

Manage the environment to avoid the unwanted behavior, so don’t give them your slipper to play with if you don’t want them to chew shoes as they get older! 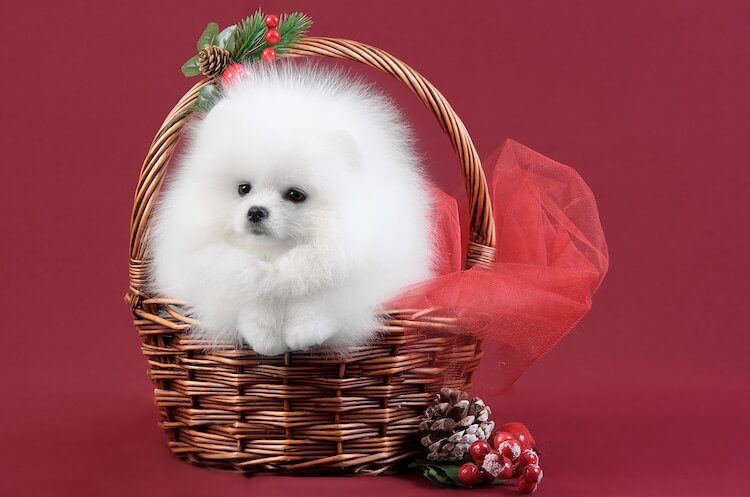 Being a toy breed, the White Pomeranian is predisposed to suffering with luxating patella. This is where the kneecap sits outside of its normal anatomical position.

This illness results in the inability to extend the knee joint (surgery is possible, but not always needed).

This is where the windpipe becomes weakened and results in difficulty breathing. It more often affects middle-aged dogs and can be congenital or acquired.

Finally, this breed can also suffer with Black Skin Disease, also known as Alopecia X. You would notice bald patches and dark skin.

It is a result of a hormonal imbalance and a reduced production of melatonin.

There are a range of treatments available so if your Pom develops this condition, discussion with your veterinarian is essential.

A fox-like face with a pure as snow coat, this tiny pooch has a huge personality and they are the ultimate companion, for those who understand his needs.

The White Pomeranian is perfect for singles, couples, seniors or families with older children who understand the needs and fragility of toy breeds.

30 to 60 minutes of exercise will be ample for this little dog, so they suit city living well too. Just remember to keep them on-leash; they can be quite stubborn!

Alert and intelligent they will respond in trick training and thrive at activities like: rally, agility or obedience.

Equally, if you are a more chilled out dog owner, they are quite happy curling up on the sofa.

19 Reasons Why The Labradoodle Is The Best Doodle

The Labradoodle breed is a designer dog that was first bred by mating a standard-sized Poodle with a Labrador Retriever. Despite their lack of recognition by the American Kennel Club, they are becoming an increasingly popular breed among the canine community. Labradoodles are loved by Continue Reading →

Red Husky: Everything You Should Know About The Red Siberian Husky

The red Siberian Husky dog is known for their mischievous nature, playfulness, and high energy drive. All Huskies (no matter the color) have the characteristics of true working dogs: running for hours, thriving off exercise, and requiring a job. Unfortunately, no matter how beautiful, because Continue Reading →

Yorkipoo Everything You Should Know About The Yorkie-Poo Dog

The Yorkipoo, a mix between the Yorkshire Terrier and Poodle, is a small to medium size hybrid pooch. This vivacious mix has a loving personality and a constant desire to be the center of attention. Known for being both playful and kind, they make a Continue Reading →

King Shepherd: 10 Reasons Why This Shepherd Dog Is Unique

Pocket Pitbull: Everything You Should Know About Pocket Bully Dogs