Pomeranians are the perfect pet for city dweller’s with their tiny size and endearing personality.

They are best known for their lively nature and adorable fluffy coats.

However, did you know that a Pomeranian’s fluffy double coat can come in 10+ different colors?

There are actually 13 different Pomeranian colors that range from pale cream to merle.

Perhaps you will fall in love with their famous orange coat or maybe you will like the rare brindle pattern?

There are 13 different Pomeranian coat colors that are all recognized by the American Kennel Club.

Some colors like beaver and brindle are rarer than the more traditional red, orange, white and black. You can see a complete list of all coat colors in the table below:

When dog lovers think of this breed they think orange.

Breeders call an orange Pomeranian clear orange to differentiate between this color and orange sable.

This color is bred by mating an orange Pomeranian with a sable that carries the recessive clear gene.

These Pomeranians are often pale as puppies. It is a joy to watch them mature and see their color change from a pale creamy white to bright orange. Sometimes these puppies have a sable coat that fades into a clear orange too.

They tend to lack black fur and sport a lighter cream color with a gradient of light to dark orange colors.

Orange Pomeranians are very easy to find and are recognized as an acceptable color in their breed standard.

A red Pomeranian’s coat is a deep red rusty shade with lighter cream fur on their chest. It is often confused with the subtler orange.

Red is one of many colors that can be shown in a ring. They are similar in terms of genetics to black Pomeranians because both coats are attributed to the E Locus gene.

Red and orange are among the two most popular colors. 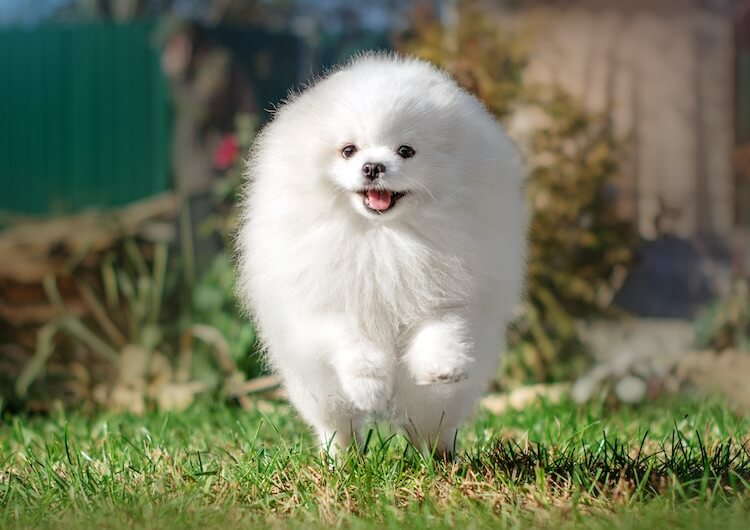 The white Pomeranian is pure white with no cream or dark-colored markings.

If you love the appearance of a Samoyed dog but want a smaller breed then this white pooch is perfect!

They are born white as puppies and remain this color throughout their life.

White Pomeranians are white due to a lack of pigment. They do not have the dark melanin pigment (i.e. black eumelanin) that dogs typically have. A lack of pigment is what gives albino animals red eyes or pink noses. However the white Pomeranian is not albino because its eyes and nose are black.

This delightful cloud-like dog is perfect for anyone who dreams of having a fluffy pet and requires the same care, exercise, and nutrition as any other color of Pomeranian. 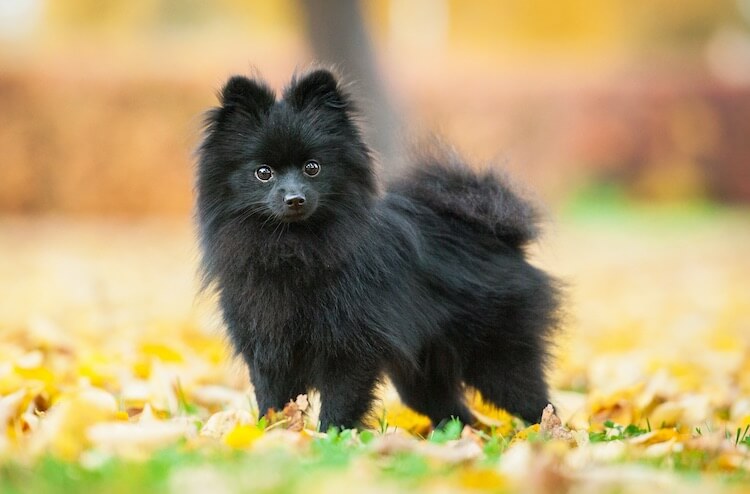 This Pomeranian is an adorable solid black color.

Known by fans as a creature of darkness they still have the signature cheeky spirit we love about this breed.

The black color is produced by the E Locus allele gene that increases the production of black pigment and results in a solid black Pomeranian.

Be careful when taking a black Pomeranian outside as sun exposure gradually bleaches their fur and results in a reddish-brown coat.

This color is perfect for someone who likes to wear black clothes as shedding fur will remain hidden! 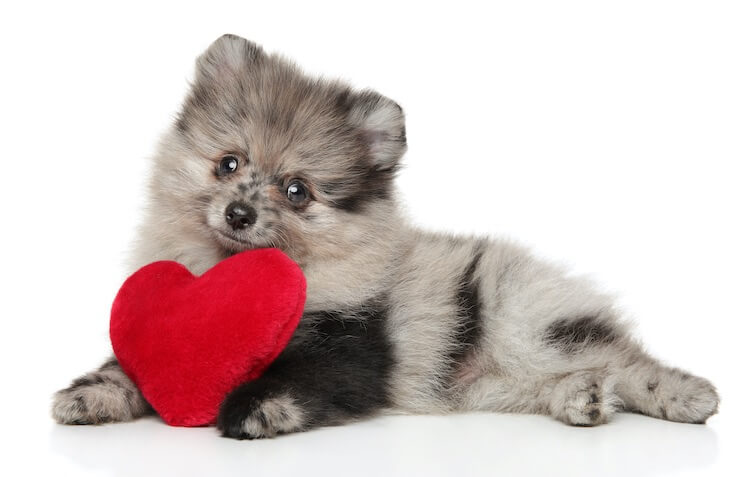 Merle is a beautiful color pattern because the fluffiness of a Pomeranian’s coat shows off the splattering of red against a tan base with patches of white. This color is very similar to an Australian Cattle Dog.

They are often seen in a blue or red merle pattern.

Their nose and paws are often mottled shades of pink and black and their eyes can range anywhere in color from dark brown to blue.

This pattern is bred by mating a merle parent with a black or chocolate Pomeranian.

Make sure your breeder understands the risks associated with breeding merle dogs. A double merle can be highly susceptible to deafness or blindness. This is because the double merle gene suppresses certain pigment cells in the iris and cochlea.

This color will wow everyone at the dog park and is perfect for anyone looking for a splash of color in their pet. 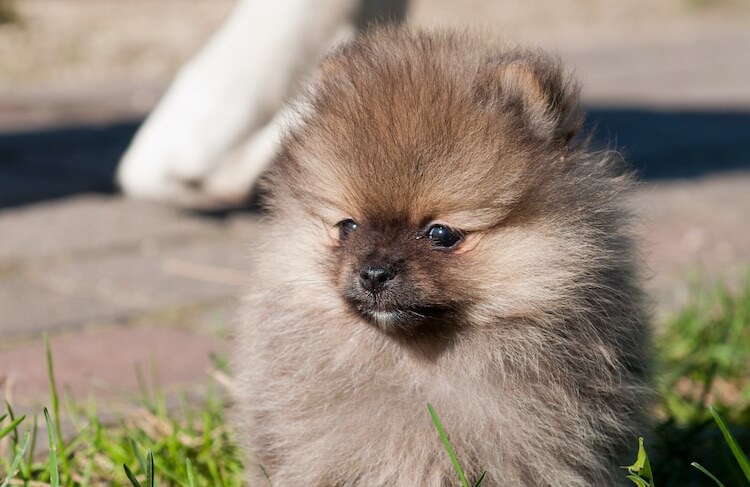 The wolf sable Pomeranian is sometimes known as gray sable because it looks very similar to a gray but has black-tipped guard hairs.

This gray color variation has a sable coloring that gives them a black nose, eye rims, lips, and paw pads.

The darkest parts are often the face, back and chest.

Wolf Sable is one of the rarer Pomeranian colors and many are misidentified as orange sable. It is incredibly hard to find a purebred wolf sable Pomeranian despite the first one being shown in 1901.

The only way to be sure your puppy is Wolf Sable is through a color gene test.

They have no known health issues specific to its color, however because of their rarity they are very expensive and can cost $2,000.

Chocolate Pomeranian dogs can range in color from milk to dark chocolate and their nose and paw pads are often the same silky brown color.

The chocolate or liver color is caused by the B Locus gene creating black pigment that darkens a dog’s coat. A mutation dilutes this pigment and results in chocolate colored coats.

Like many darker furred dogs they do best when kept out of direct sunlight for long periods of time. Sunlight will redden the fur and make it harder to see the chocolate color.

This dog makes a great choice for any owner who wants a walking teddy bear.

This Pomeranian is born silver gray and has a dark gray guard hair with blue undercoats.

The blue color is recognized by the American Kennel Club and is easy to admire.

Blues are bred from two solid colored parents that carry the dilute gene.

There are health issues associated with any blue dog because they have a chance of color dilution alopecia which results in hair loss and dry skin.

If purchased from a reputable breeder blue colored Pomeranians make for a beautiful companion. 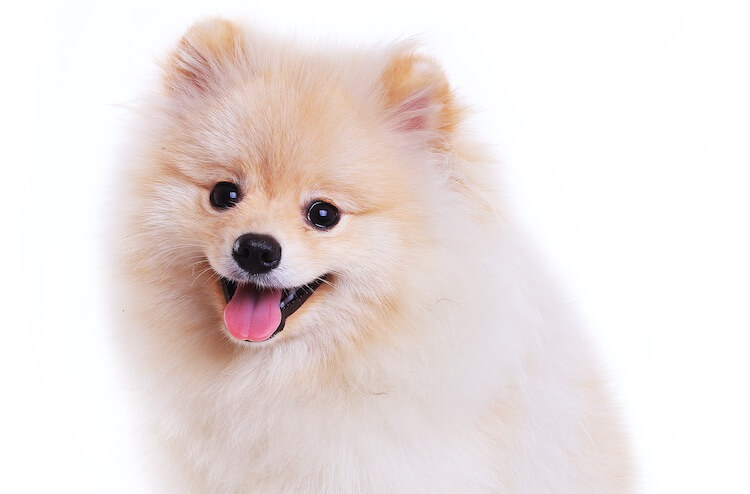 The cream Pomeranian is a beautiful dog with pale fur that looks like honeycomb.

This cream colored dog is often born white but its coat darkens in color after a few months to cream.

One of the genes involved in producing the cream color is the E Locus gene that gives the red Pomeranian its color too.

This color variety needs plenty of grooming as their fur can show up easily on clothes.

Brindle patterned dogs are streaked with colors of red, gold, orange and black.

The Pomeranian’s long coat acts as a canvas for layers of earth tones.

Brindle is more of a pattern than a color that results in dark stripes. The darkest points are often the paws, ears, muzzle and back.

Some have more of a gray hue and some a brown color.

The brindling pattern is caused by a recessive “ee” E Locus genotype.

Every brindle looks different from the other, so you can be sure you are getting a unique looking dog. 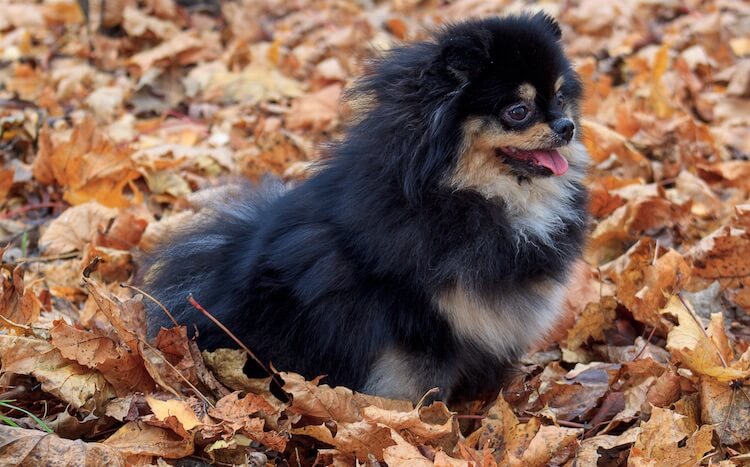 The black and tan Pomeranian is a color variety that sports a black and tan pattern. They are fluffy with black fur on their face and back and have tan on their chest, and legs.

Tan highlights accentuate this breed’s signature dot eyebrows and gives them a cute and adorable appearance. Many have adorable dot markings above their eyes reminiscent of eyebrows.

Adorable and feisty is the best way to describe this color.

They are very similar in genetics to sable colored Pomeranians as they share the same recessive allele.

Black and tan Pomeranians are unique and look like a smaller Rottweiler or Doberman Pinscher.

Anyone who loves the appearance of those breeds but would rather have an apartment-friendly dog will love this dog. 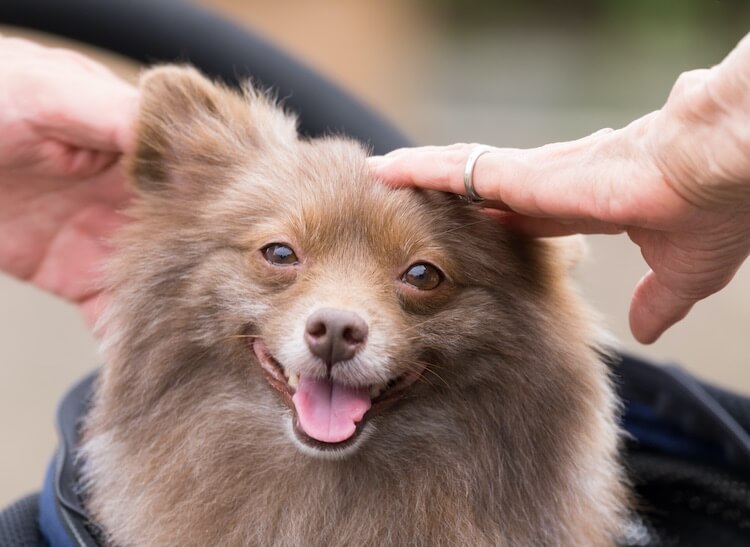 The beaver Pomeranian is a light brown color that is reminiscent of a pale cookie. They used to be known as biscuit.

This dog has hazel eyes and an entirely light brown coat with a lighter cream color on their chest and neck. They comes in a variety of shades from brown to beige.

The beaver’s dilute chocolate coat is thanks to dilute gene mutation.

Like the blue Pomeranian this dilute color can cause color dilution alopecia. This is a genetic condition that results in hair loss and itchy dry skin.

Make sure you ask your breeder if they have screened their breeding stock for color dilution alopecia. 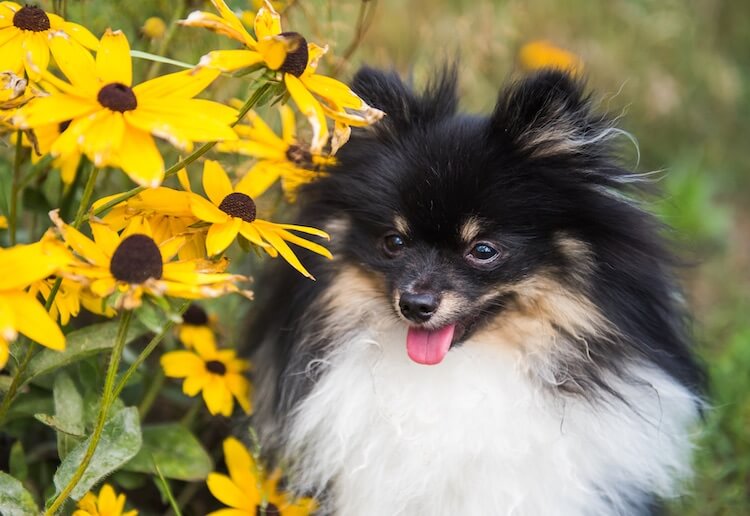 The tri-colored Pomeranian is similar to a black and tan except this dog features the addition of white.

They are well known for their black, tan, and white patterning.

This color can manifest in a variety of different ways:

What always seems to appear on this color is two tan dot eyebrows giving them a feisty expression.

As every tri-colored coat sports a different ratio of black, tan, and white, anyone who chooses this variety will always have a unique dog. They are perfect for anyone who does not want to settle on one color!

Choosing A Color: What To Know

When it comes to pomeranian colors there is a different shade for every type of person.

Most of the colors in this list (e.g. red, orange, chocolate) are very healthy. However, you should be aware of the health concerns with diluted colors (e.g. blue and beaver). Diluted colors are associated with alopecia, hair loss and dry skin.

If a breeder sells double merle puppies (i.e. both parents are merle) then avoid them. These puppies are likely to have auditory and visual issues.

You should expect to find a small price difference for each color. Traditional colored Pomeranians are priced between $1,000 to $1,500. Rarer colors such as black, brindle, white and blue tend to be more expensive at $1,500 to $2,000.

You May Also Like: Micro Pomeranian Guide: 5 Must-Read Facts

Pomeranians are small dogs that are lovable, cute and make a great choice for first time owners.

In this list we have shared with you all 13 recognized colors and coat patterns – but this is only the tip of the iceberg.

If you think this is the right breed for you, try and find local breeders who breed specific colors. Their large color variety makes for finding a puppy even better.

Which color was your favorite? Let us know in the comments below.

Bringing home a puppy is a wonderful and exciting experience; it’s also the best time to start their training. These first few weeks are filled with special achievements, development milestones and important bonding time. However, you are likely going to be faced by boisterous and Continue Reading →

Finding a Responsible Breeder: 7 Tips for Buying a Dog

Buying a dog, or adopting a dog, is a huge decision to make, similar to those life decisions we make like career choice, whether to get married and whether to have children. If you make a mistake with your career, it’s possible to change direction Continue Reading →

14 Dog Shelters Speak Out: What You Should Know BEFORE Adopting a Dog

Having previously worked for a dog shelter, when it comes to dog adoption, I can say there are two events which all volunteers remember: The first time a dog is successfully adopted from a shelter The first time a rescue dog is returned back to Continue Reading →