The Cane Corso is also an affectionate breed who craves cuddles, kisses and praise.

Hard-working, with a solid build, this Italian dog is the fastest in the Mastiff family.

As well as being hard-working, this breed’s high trainability and stamina make them a pleasure to work with.

So, what else is there to know about this misunderstood breed?

Here, we will share with you our ten incredible facts about this large and loyal puppy!

From facts on their heritage, bloodline, and pedigree, to facts about a Cane Corso’s size, speed and endurance; we have tried to cover all of our bases so you can get to know this loving and hard-working breed a little more.

10. This Mastiff Has Italian Roots

The Cane Corso originated in Italy.

It is believed that this breed is a descendent from the Canis Pugnax; a Roman Molossian breed who was the war dog of the Roman Army.

Once the war was over, the Cane Corso adapted to a more civilized lifestyle.

The breed who we know today, found his home of choice on the farms in Southern Italy where he lived to hunt and drive livestock.

Like other Mastiffs and guard-dogs, they were given the responsibility of guarding grounds and land; specifically vine lands in Southern Italy.

This is a breed who has strong ties to the Italian countryside and is therefore often referred to as the “Italian Mastiff”.

These dogs were as happy running around and working all day as they would be lying by the fire with their owners in the evening.

Both their temperament and stamina made them a strong companion with a high degree of adaptability for many Italian farmers.

9. This Breed Was Recognized in 2010 By The Kennel Club

The Cane Corso was not recognized by the American Kennel Club until 2010.

Since 2010’s breed standard, official breeders have tried not to stray far from this breed’s natural Italian heritage.

It is important that you get to know your breeder before purchasing a Cane Corso puppy.

This ensures that you are more likely to get a healthy and happy dog, who will grow into a loving companion with all of the Cane Corso’s desirable traits.

8. This Breed Is Known As A Molossus Dog

Although the Cane Corso originated in Italy, it is believed that they were once a part of the Ancient Greek Kingdom and are therefore known as a “Molossus” dog breed.

These breeds appear constantly throughout Ancient Greek history through old sculptures and paintings.

These dog breeds are recognized by their large, strong stature and wide chests with muscular features.

The Cane Corso is classified in the Mastiff breed-group.

They they are less-bulky than most Mastiffs. Apart from their size, all of their other physical features fit in well with the other Molosser-type classification.

It is there lack of bulkiness that allows this breed to be one of the faster Molosser-type of dogs. Their endurance and speed allow them to be excellent large animal hunters as well as protectors.

The Cane Corso has a strong and broad head with a well-defined and muscular figure, which tend to be rectangular in shape.
They also have elongated muscles that aid in their dignified appearance.

7. They Were Nearly Extinct!

By the 1970s, after WWII, and after the modernization of some Italian regions, this dog breed became quite rare and difficult to find.

Their working dog characteristics and strong guardianship was not needed nearly as much.

Additionally, their tasks were given to smaller and easier to manage dogs who were growing in popularity all over Europe.

Mr. Giovanni Bonnetti and Dr. Paolo Breber were two men who can be thanked for the beginning of the resurrection of the breed.

These two men set to work and began trying to repopulate this impressive working dog.

Further along, the Malavasi Brothers of Mantova, who were professional German Shepherd Breeders, were so impressed by the breed they further helped to ensure that the breed did not become extinct.

A recovery center was set up and eventually the breed was continued and even bred with close canines such as the Bullmastiff.

Ultimately, it was the Cane Corso’s German Shepherd-like traits of intelligence, power and stamina which caught the attention of many and saved this breed from extinction. 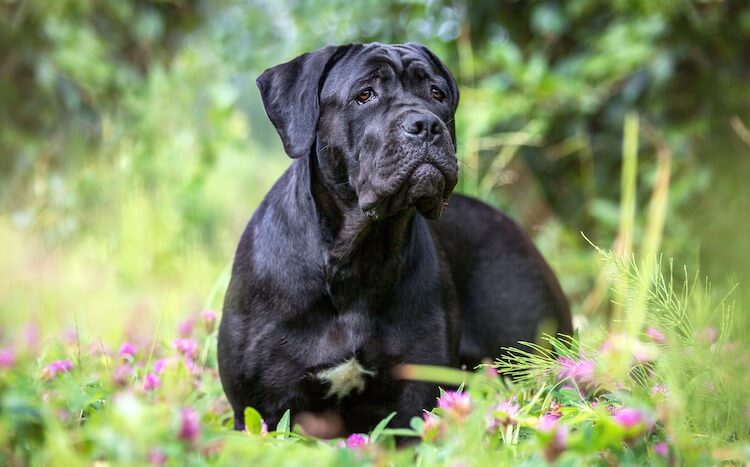 This dog was bred to guard property as well as to hunt large animals such as wild boar; being a protector and a guardian is in their blood.

Intelligent, loyal, affectionate, protective and strong this dog has a dignified and powerful appearance.

All of their characteristics give many reasons for why this breed makes a perfect guardian and protector.

The Cane Corso is commonly used as a guard dog for families.

They are said to make excellent guard dogs because, unlike other breeds, they never attack without reason. Therefore, having a very stable temperament.

Their intelligence and strong bond with their owners also help them sense their owners’ uneasiness when a threat may be close by.

The police and military have been known to use the Cane Corso for their guardian and protective abilities.

“Solider” is trained at Iron Mountain K9 in Oregon for the police force. He is a prime example of their stable temperament and power.

Unfortunately, a large working dog requires much more than just some love and affection. That is why this breed does not adapt to any lifestyle or ownership type (they have very specific needs).

The Cane Corso has high mental and physical exercise requirements.

They require at the very least 60 to 90 minutes of intense exercise per day. This may be given through a long walk or ideally a run.

This dog has also been known to make great swimming or cycling buddies too!

On top of their physical exercise requirements, the Cane Corso requires plenty of mental stimulation.

Mental stimulation can be achieved in several ways:

Introduce your puppy to new and exciting places so that they are able to stimulate all their senses including sight, smell and even touch.

However, you should start by leash training your dog. The Cane Corso is known to be a little stubborn, so they may not always come back when called (this is not ideal for such a large breed)!

Providing your dog with mental and physical stimulation is important so that problem behaviors (e.g. barking, chewing and even escaping) do not occur.

Additionally, this is a dog breed that requires a lot more than just your typical large yard to run around in.

It is recommended that before owning this dog, you have a highly fenced backyard as they are known to be able to jump high and escape from many enclosures.

When it comes to comparing this dog against others, they may be amongst the large dog breed group but they are certainly not giant.

They are classified as a large dog breed (not giant).

Their large and powerful muscles adds to their large appearance which can give the impression they are larger than they really are.

How big is the Cane Corso?

The female, whilst being a very large dog, is slightly smaller in comparison and weighs approximately 88 to 100lb standing at a height of 23.5 to 26 inches.

Their big size has many benefits, including they are only able to have approximately 4 to 6 puppies per litter.

3. This Breed Is Banned In Some States

This breed is banned in some states throughout the USA.

It is reported they are banned due to the prevalence of their involvement of the injuring and killing of smaller domestic animals.

Additionally, there are many cities and towns within states which impose restrictions on specific breeds which are put in place to prevent dog attacks.

An example of a town banning the Cane Corso is Ashton, Idaho.

These restrictions taint a breed’s reputation by deeming them unsafe and dangerous to the general public.

However, we believe that with correct socialization, training, and careful and experienced ownership that this breed can become a great companion animal.

Early socialization (and positive reinforcement) with many positive experiences throughout the younger months of your puppy has a major effect on the growth and maturity towards adulthood in the canine species.

2. This Dog Is Low Maintenance

Due to their easy-to-care-for coat, which is short and does not shed often, this breed is known to be a light shedding breed.

Surprisingly, despite their single coat, the Cane Corso is able to adapt very well to cooler climates. However, this is limited to slightly cool temperatures and not extreme conditions.

It is possible for their coat to come in a variety of colors. These colors include:

The Corso doesn’t require regular trips to the groomers. They will do just fine with regular brushing at home, this can also be soothing for them and helps to eliminate dead hairs and debris stuck in their coat.

Do make sure you keep up with your puppy’s nail care as well as regular dental care.

We recommend brushing your pup’s teeth as often as possible. However, we know that this can be difficult so perhaps opt for dental chews or toys!

1. The Cane Corso Is Loving, Loyal and Affectionate

This dog breed is known to be an extremely loving, loyal and affectionate companion.

With proper socialization and consistent training (through the use of positive reinforcement methods), this puppy can fit into a family-orientated lifestyle very well.

They are even known to try communicating with their loved ones with “woo-woos” and snorts.

Whilst their playful nature makes them the perfect for playing with children. We do not recommend placing this puppy into a home with small children.

The Cane Corso may not be so patient with little children, so it is best to keep them in a home with experienced owners with older children (or even adult-only households).

It is important to be aware that this breed may be wary and suspicious of strangers and therefore proper introductions are necessary.

There you have it, ten facts about one of the world’s most misunderstood dogs; the Cane Corso.

Unfortunately, their loving nature, calm demeanor and affectionate personality are often over-shadowed by the negative stigma surrounding this breed.

Before adopting this breed, make sure you visit lots of breeders and have hands-on experience with this breed to ensure you are a competent and experienced handler.

We hope this article has given you enough facts to peak your interested in this Italian rooted pedigree.

Not only is this Mastiff a hard-working, well-built and a great guardian dog, but they are also loving, loyal, and affectionate.

How To Train A French Bulldog In 8 Weeks (Easy, Fast, & Fun)