The Great Pyrenees has a long and noble lineage as historically they were favored by rich families for their companionship and patience.

Because of their kind and patient nature they do well in homes with children and make an excellent match for owners who have the space to keep a large dog. Though they can live in apartments, they are at their happiest in bigger homes with garden they can roam around in.

They make an especially good match for owners who live in cooler climates!

Outside of the United States, this breed is often referred to as a Pyrenean Mountain dog. The Great Pyrenees and the Pyrenean Mastiff, although they are similar in appearance, are two different breeds.

If this sounds like the kind of canine you would be interested in, then keep reading to find out 9 facts about the graceful Great Pyrenees!

9. Their Ancestors Can Be Traced To The Bronze Age 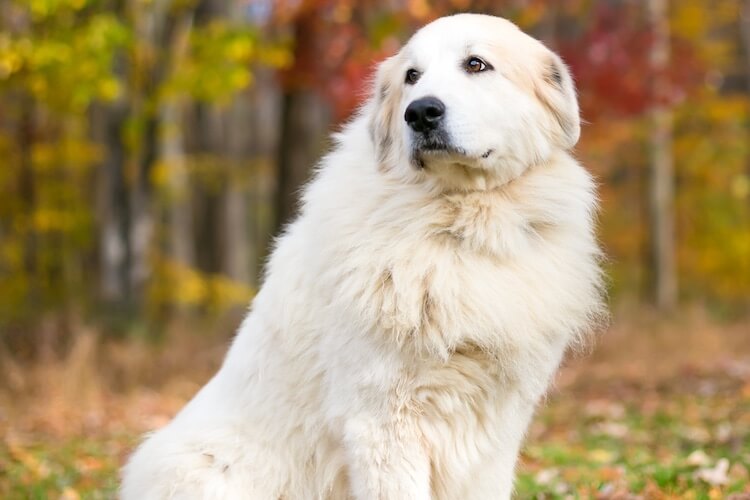 Ancestors of this breed are thought to have been seen as far back as 1800BC, in fossil deposits found from the Bronze Age. It is thought that the breed originated in central Asia and accompanied people migrating across Europe.

The Great Pyrenees dog was first seen on the mountain range between France and Spain sometime between the 16th and 17th Century. They were described as white shepherd type dogs.

These dogs were extremely popular in mountain towns, where they were used to guard sheep on the steep mountain slopes. This was more than likely due to their 25 to 32 inch height their 85 and 140 pound body mass!

In 1675, this breed was a favorite of the French royalty and other wealthy families. French royalty loved their beauty and poise, but also their gentle and protective temperament.

Great Pyrenees dogs were first seen in America in the early 20th Century after they were imported from France in 1931.

8. A Great Pyrenees Is Very Protective Of Their Owners 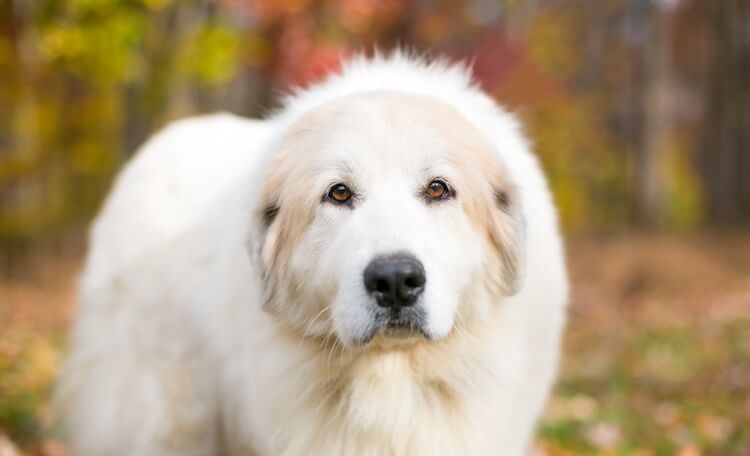 The Great Pyrenees is described as a confident and gentle dog. They can be quite protective of their owners and will take a while to settle in the presence of a new person.

They are often found patrolling the perimeter of their owner’s property and will warn of strangers with a bark. They can make excellent watchdogs due to their size and continual vigilance.

Owners should prepare for an odd activity pattern, most often this breed is most active at night!

As Great Pyrenees’ duties would usually involve them living alone, they are not usually outwardly affectionate upon first meeting strangers. Traditionally living alone, they do not often show signs of separation related issues. However, they do not enjoy being left alone for long periods and instead enjoy living close to the action so they can understand what is going on.

Their wandering and nomadic habits mean they are likely to wander off if unrestricted in an unenclosed space. Consequently, anyone who adopts this breed should be sure their yard is properly fenced in order to prevent any potential escapes!

Like other breeds of their size and stature, this breed tends to be a drooler (especially during warm weather or just after exercise).

7. He Makes An Excellent Family Pet 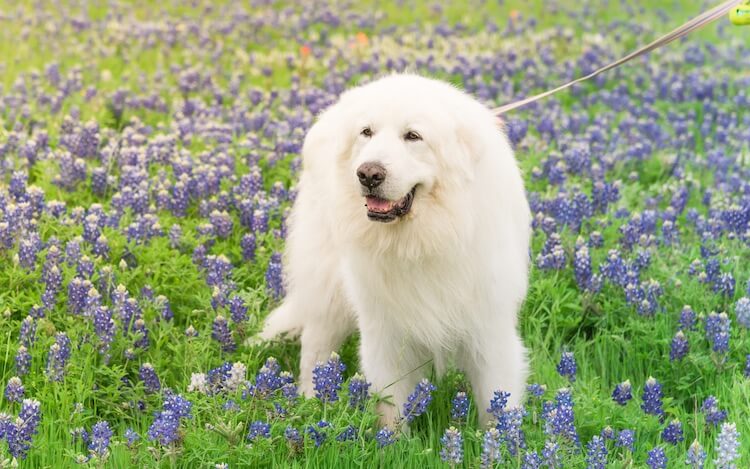 It is important to remember that even the sweetest natured dogs have a breaking point.

The Great Pyrenees’ gentle nature carries over into their interactions with other dogs.

Though they would live alone traditionally, these dogs have excellent social skills and often enjoy the company of other dogs.

To fit with all their eccentric habits, the Great Pyrenees needs a home that will accept them for the way they are. Any owner should be prepared for a bit of drool and a lot of dog hair! This breed does not cope well in hotter climates and so owners should ideally live in colder parts of the states.

6. He Is Naturally VERY Stubborn and Independent

Because of the nature of their work, most sheepdogs are aloof and independent. A great example is the Italian Sheepdog.

Due to the naturally independent nature of Great Pyrenees dogs, their breed standard describers them as stubborn and unwilling to work. Due to their natural intelligence and independence, they were mistakenly thought to be stubborn

Great Pyrenees would not need to take commands from an owner while protecting their flocks, and this carries through into the modern breed too. However, with the right incentives, they can be a highly-motivated breed.

Not a great choice of dog for an inexperienced trainer, instead they are better suited to an owner who has experience training independent-natured dogs,\ and knows how-to make training fun for both parties.

Great Pyrenees are very intelligent dogs who can pick up basic commands very fast (if they are in the mood to).

Having a strong bond with your dog will help you with training. Although it sounds obvious, playing games and spending quality time with your dog will actually help to make training easier, especially with breeds who are naturally independent.

5. They Need Five Cups of Kibble each Day 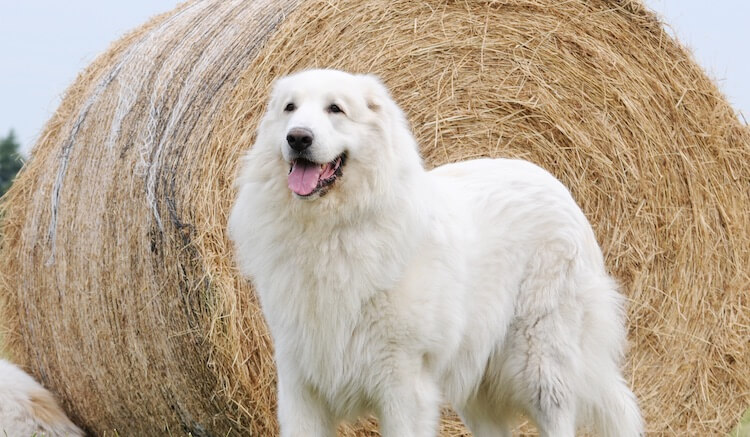 To feed a giant dog you will need a lot of food!

On average, this giant breed will eat between four to five cups of high quality kibble every day. This should be divided into two meals to split calorie intake throughout the day.

Beyond this, Great Pyrenees dogs are not fussy!

They can do well on wet, dry or a raw diet. Whatever you feed, an adult Great Pyrenees needs a diet with:

Though the Great Pyrenees does love to eat, owners should be careful not to overfeed their dogs.

The Great Pyrenees Club of America report that these dogs have a slower than average metabolism, and as such are more prone to obesity! Owners should therefore try to resist their dog’s adorable puppy eyes. This is not to say that you can’t treat your dog. Instead, try giving your dog healthy treats, such as dog safe fruits and vegetables.

4. The Great Pyrenees Is Giant-Sized!

An adult can grow to measure 25 to 32 inches tall and will weigh anywhere from 85 to 140 pounds at two years of age.

Although they are giant in size, the Great Pyrenees surprisingly only requires a small amount of exercise; on average, these gentle giants need only 30 minutes of daily exercise.

Because they have giant coats, they can overheat very quickly and suffer from heat stroke. Owners should ideally walk their dogs at cooler times of day and provide them with lots of water and shade when they return home.

Due to their enormous size, it is incredibly important to not over exercise these dogs as puppies.

Over exercising in puppyhood can put strain on the incomplete growth joints and cause early onset arthritis. Although they appear to be active and bouncy, owners should find other ways to tire out their puppies (e.g. brain games or environmental enrichment).

The Great Pyrenees is generally a very peaceful dog, they are content to spend the majority of their day sleeping in the sunshine, or watching the world go by.

3. He Is Fluffy and Needs Daily Grooming 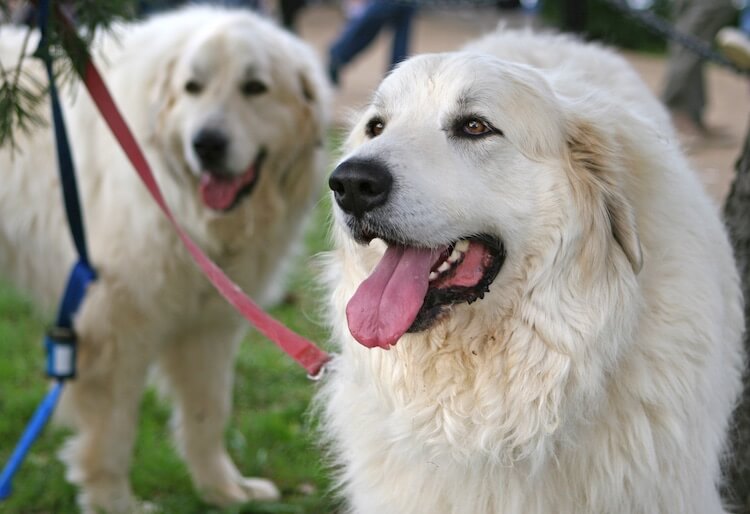 These fluffy pets come with a fluffy workout for their owners!

They will need thorough grooming each day to remove loose hair. This will also help to prevent their fur from matting. Owners report the best tool for this is a metal slicker brush which allows for full penetration of the thick coat.

Owners should be prepared for their homes to be covered in dog hair all year round! These dogs are by no means hypoallergenic; in fact they tend to be incredibly high shedding.

Their coat is not designed to be cut, clipping their coat will result in your dog overheating, as these dogs require their coat in its entirety to be able to thermoregulate.

Owners should attempt to bathe their dog as infrequently as possible as to avoid drying out the skin.

When bathing your dog, be sure to fully dry the coat afterwards. Leaving their thick coat damp can result in mold growing within their coat! 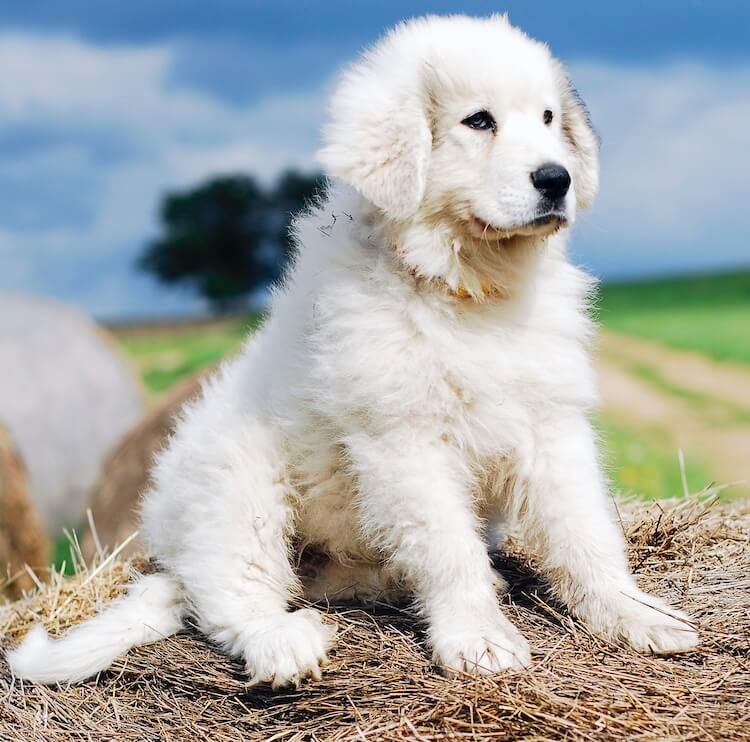 Great Pyrenees puppies are a bundle of fluff and fun! These puppies are known to be cheeky and funny dogs, who love to push boundaries (much like their fully grown selves).

Bringing home your puppy at eight weeks old means introducing them to all the joy in the world, known as socializing. Puppies will need minimal exercise while they grow, but will need lots of exposure to the world around them. Take your puppy to meet lots of people and see many places (at puppy’s own pace) to encourage healthy socialization.

A Great Pyrenees puppy from your average breeder will cost between $600 and $1,500 USD. However, those with pedigree, or more desirable working bloodlines, will sell for between $3,000 and $5,000 USD!

Which such a high price-tag for premium bloodlines, these dogs often attract irresponsible breeders and puppy farms. Consequently, it may be beneficial to do some research into breeders before purchasing a puppy.

The American Kennel has a list of registered breeders who have been inspected to meet their standards.

Though it can be fun to raise a puppy, some people would prefer to adopt a Great Pyrenees rescue. As a rare breed, it is unlikely they will be seen in your local shelter or rescue.

If you have your heart set on rescuing, it may be worth contacting the National Great Pyrenees Rescue. They re-home all over the United States for a small fee. 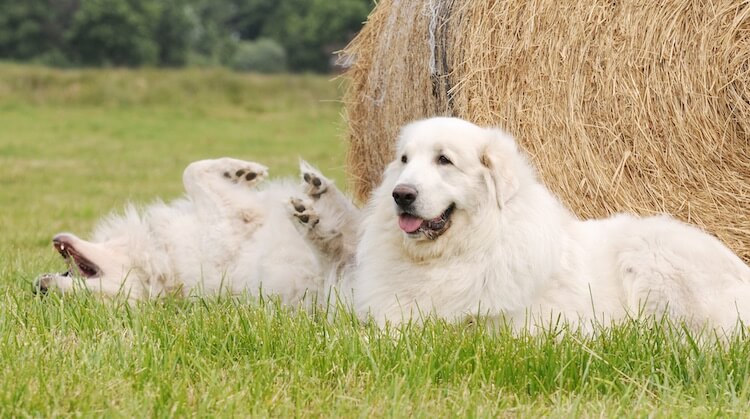 Great Pyrenees are mostly known to be happy, healthy loving dogs. However, like most breeds, they are prone to a few health issues, the majority of which are musculoskeletal.

As these dogs grow so fast, it is often the case that the cartilage grows too quickly.

This can cause incorrect formation of the joints which can lead to conditions such as elbow and hip dysplasia. While these conditions are treatable (either with anti-inflammatory pain medication or in more severe cases, surgery) they can cause significant pain.

Similarly, Patellar Luxation is common in this breed too.

This condition causes a Great Pyrenees to be unable to correctly extend their knee joint, causing an odd “bunny hop” style of walking. As with hip and elbow dysplasia, patellar luxation can be managed with anti-inflammatory pain medication or corrective surgery.

Great Pyrenees are most at risk of developing Canine Multifocal Retinopathy.

This is a genetic condition whereby lesions begin to develop on their eyes. As the dog ages, this causes retinal atrophy and vision loss. Since the condition is genetic, it is possible to test the parents to see if they are carriers before purchasing a puppy.

Do you have a Great Pyrenees at home? Are you thinking about getting one? Leave us a comment on these gentle giants in the comments below.