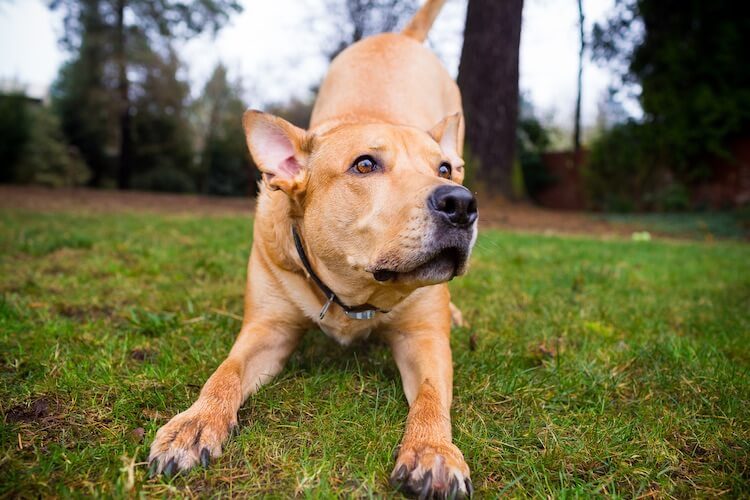 The Pitbull Lab Mix, also known as a Bullador, is a hybrid dog.

This energetic, smart and loyal dog is the result of cross breeding a Pitbull with a Labrador Retriever.

Having genes from the most popular dog in the US (i.e. the Lab), you are certainly getting a loveable rogue with this mix.

High in energy, and super easy to train, this dog breed is a great addition to any family who are used to large breed dogs.

Read our complete pet-parents guide below to learn more about this dog breed’s temperament, appearance, exercise and feeding requirements.

Exclusive Giveaway: Grab The Pitbull Lab Mix Dog Book To Learn Everything About This Dog.

What is a Pitbull Lab Mix? Dog Breed Information

The Pitbull Lab Mix is an energetic dog who loves to keep busy. This is hardly surprising when he comes from two parents who were historic working dogs.

Being a hybrid dog breed, the Pitbull Lab Mix isn’t recognized by any major Kennel Clubs, but, they are recognized by the Designer Breed Registry as a Labrabull.

It is unclear when these happy-go-lucky dogs first appeared.

Some people argue breeders attempted to combine the best qualities from both parent dogs:

On the subject of the parent breeds, let’s look at them in a little more detail to understand more about the Pitbull Lab Mix. 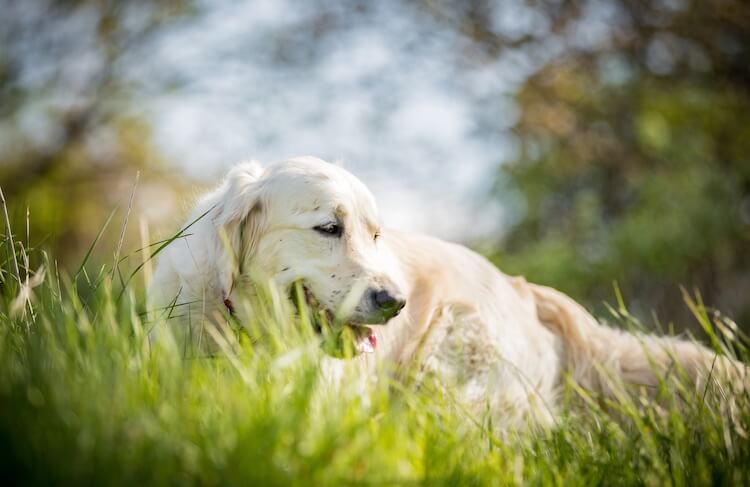 Being the most popular dog in the US, we would hazard a guess you know someone who owns a Labrador!

They are super friendly, energetic and confident dogs.

Being the traditional water dog of Newfoundland, they were adored for their work ethic. They were used to retrieve the fish that came in off the trawl, which is why most Labradors you will meet, love the water!

Still popular workers today, but most commonly as guide dogs, the Labrador found its way into the homes and hearts of many and they make a perfect family companion. 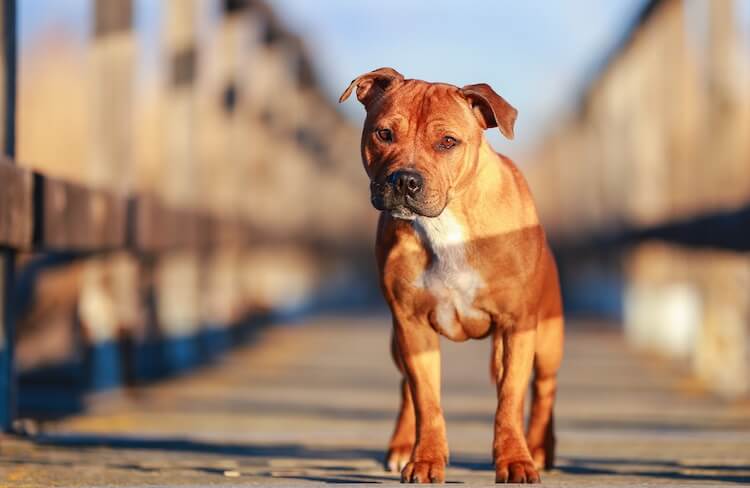 There is often confusion around the Pitbull dog.

Generally speaking, the term Pitbull is used as a classification of dogs who tends to have a similar appearance:

So, your Pitbull Lab Mix, could technically be a cross between a Labrador and any of the four above dogs.

All of these dogs were historic fighting dogs and none of them have a particularly good reputation.

When raised in the right hands can be the most loyal and loving dogs you could ever wish to meet – they are eager to please, incredibly smart and super-trainable.

As with any cross breed, you can never be entirely sure of the dog you will end up with.

You may end up with more Pitbull qualities than Lab or vice-versa, you won’t know until your puppy has matured into an adult dog at around 18 months of age.

Generally, your Pitbull Lab Mix will have small droopy ears with a soft, smooth coat, however like temperament, hybrids can be unpredictable in appearance, you can see in the pictures in this article!

Your Pitbull Lab Mix puppy will likely come from a litter of 5-10 puppies, but, the average size is 7 puppies.

A Pitbull Lab Mix price should be around $500.

As both parents can be similar in size, it generally doesn’t pose an issue which parent is the sire or dam providing you have sourced a reputable breeder.

The Pitbull Lab Mix, when raised and socialized correctly, can be super-sociable and friendly. They can learn to love everyone and everything.

However, you must be mindful of the tenacious history of the Pitbull dog. They can be feisty if their energy isn’t channeled into the right activities and exercises.

They are incredibly smart, so you too must be prepared when it comes to training.

He responds best to positive reinforcement and reward-based dog training.

Being so eager-to-please, they will be top of the class in puppy school and they will wow your family with the party tricks the kids have taught them.

Not known barkers, they will only alert you if something is wrong (the Pitbull in this hybrid hasn’t forgotten their guardian duties).

The most noise they make will be their snoring!

The Pitbull Lab Mix is a loyal companion to kids of all ages, when raised with them and when the kids understand their needs, including their need for space.

A crate den can be a perfect addition to your home to help teach your kids that dogs need quiet time too!

Multi-pet households won’t faze this hybrid, when introduced to other pets correctly. Other dogs and cats can be loved allies!

The Pitbull Lab Mix loves a busy home where there is always something to stick their nose in, and someone to play with, they don’t tolerate being left alone.

They can get stressed which results in destruction and despair when left alone for long periods of time. Keep time spent alone to a minimum and source a local dog walker or daycare if necessary.

Caring For A Pitbull and Lab Mix (Feeding, Exercise & Training)

Your Pitbull Lab Mix will need plenty of food to keep his energy levels high.

The most important thing is to feed a good quality feed that meets his nutritional requirements. Specifically, his protein and fat needs:

Fat provides energy and we know he’s going to be burning through plenty of that:

A good feeding schedule for your Pitbull Lab Mix puppy is: 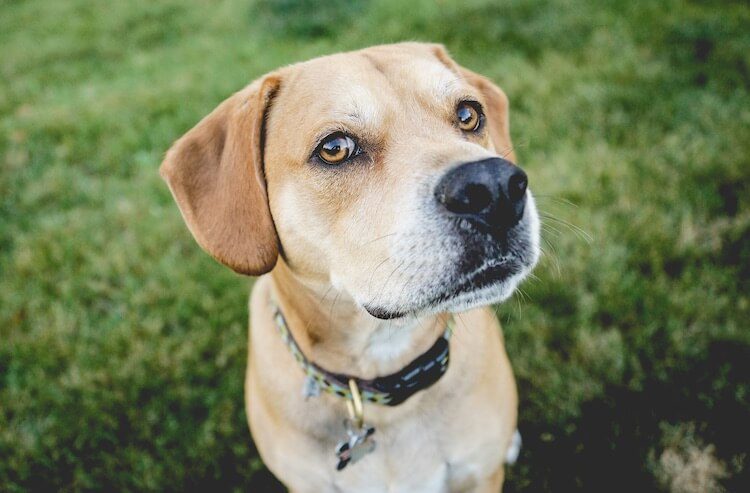 This dog will have plenty of energy, so will need his daily walks.

Upwards of 60 minutes is essential for this hybrid dog, 120 minutes of exercise is ideal for a Pitbull Lab Mix.

You should only exercise your dog to this extent once he has reached full maturity. As a puppy, stick with the 5-minute rule.

5 minutes of exercise per month of age.

Being part Labrador, he may be partial to a swim, so look for opportunities in your area when you can take him to swim safely.

Remember to invest in a life jacket for your puppy if you are going to be spending time by the water.

Being super trainable, your Pitbull Lab Mix will thrive in any dog sport:

Your dog will have the intelligence and energy to nail these sports! The kids can also get involved; many clubs will allow child handlers too.

Be mindful of the regulation in your area. If Pitbulls are restricted, you may have to abide by the same restrictions with your Pit mix.

This can often include being kept on a leash or even muzzled in a public space.

Just like all dogs, the Pitbull Lab Mix responds best to positive reinforcement and reward-based training.

Eager-to-please, they want to do what you ask of them.

Start socialization early, introduce him to everything the world has on offer, people, animals, household equipment, machinery, trucks, trains, everything!

Train the basic commands and those that could one day save his life, like stop, stay and leave, especially if he has retained the Labrador scavenging gene.

How To Train Leave

Progress to leaving treats on the floor and asking him to leave.

Being a hybrid dog, the Pitbull Lab Mix can suffer with any of the health issues his parents can:

They typically live for between 10 and 14 years, with insurance costing around $400/year.

Being a hybrid, your Pitbull Lab Mix can vary lots in appearance:

The parents will give you the best indication of their expected appearance.

They will generally have a short, smooth coat. Most likely floppy ears. They will be muscular, but lean in stature.

Classed as a medium to large breed, a Pitbull Lab Mix will weigh anywhere up to 80 pounds. Females will generally be smaller than males.

Your Bullador may look more Labrador than Pitbull (or vice versa) but, later generations will be more predictable in temperament and appearance:

Your Pitbull Lab Mix will fall relatively low on grooming requirements, 2-3 brushing sessions per week will be more than enough.

They will shed, a lot, like most Labradors will.

So, investing in a good vacuum will keep your home clean and as hair free as possible.

Regular bathing will keep them smelling clean and fresh, but 3-4 per year will be more than enough.

Check their ears and nails weekly, and brush their teeth several times per week. 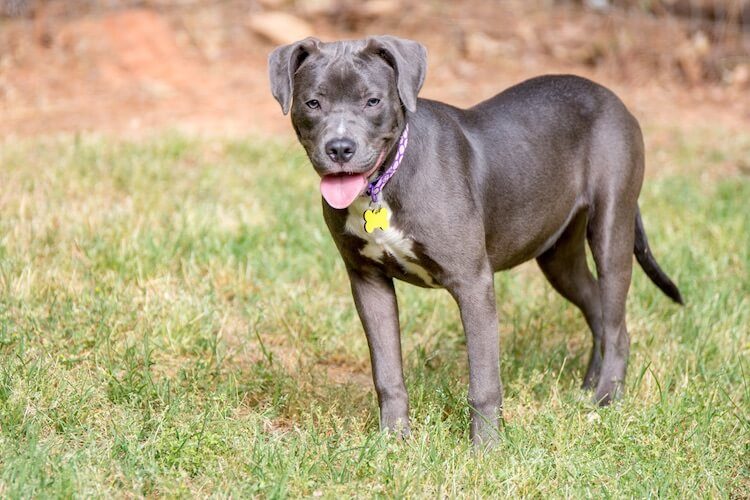 Being super friendly, sociable and eager to please, the Pitbull Lab Mix fits in to any family.

They thrive in a busy home, where they can enjoy their daily walks and regular play.

Their smart nature means they pick up commands and tricks incredibly quickly meaning they are a perfect training buddy for kids!

Like any dog they will push their boundaries, so they are best suited to families who have experience of large dogs.

Being crossed with one of the most popular dogs in the US, these guys may experience the same popularity. However, Pitbulls are restricted in a number of states so ensure you can legally own one and check the restrictions that apply.

Let us know if you own a Pitbull Lab Mix in the comments below.